15 Years of Jamiroquai - the inside story... 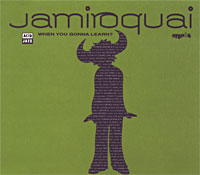 On 19 October Jamiroquai's first official UK single was released in the UK.  A news item was posted here at funkin.com about the occasion and since then I've asked Toby Smith - one of the original band members from the beginnings of the band about what it was like back then.  This is what he told me...

'Mostly my memory is very hazy! I remember Jay coming to my flat with a copy of 'When You Gonna Learn', and me thinking how good it sounded. We were partying really hard at the time, a lot of warehouse raves - no specific launch party as such.'

'The first time it felt like something was really happening was on the release of TYTD..we were recording the album at the time, and there was a distinct shift in how things felt as a band.  Great times really, a lot of laughing and blurry 5am finishes.'

'It took years for me to be objective enough to see the Jamiroquai roller coaster for what it was, in fact probably only in the last few years can I reflect on those first few months and see how things grew - at the time we were so preoccupied with the present, and gigging/partying/writing that there was no time to consider anything else. The industry has changed so much, power has shifted from the major record companies to artists and smaller independents and even though no one sells 10 million records any more I still feel that it is a really exciting time to get involved in new music. Still... watching The Hoosiers at the beginning of their career has definitely brought back memories...'

Thanks David, for tickling out those memories from Mr. Smith! Interesting to read! :)

Great idea David!
I agree with Meike, it's an interesting reading and a beautiful gift.
... even if is a little bit sad to read about those last times ...

Great reads are far and few between. This is most definitely one of them. Thankyou so much to both David and Toby.
p.s. If you're reading this, have a great birthday Toby (29th Oct').

Those must've been really great times to be remembered after 15 years!And what a great 15 years it was
And early happy birthday from me too ;)

Nice to read the reflection. I am happy that Toby is still involved in music and I hope the Hoosiers realize what a gift they have in his support and contribution to their career - both professionally and personally. Much love and luck to them both! xo

Mr Toby I always feel the same when I hear those funky notes in WYGL, you have magic in your fingers, I miss those times... :,(

A very nice reading. Thanks!

Great reading. And a great selling of The Hoosiers too :P

It's really cool to here from Toby again! Man, I wish he would come back for a project or two with JK and family!

Yeah, it would be cool if he came and did a new track with the boys.

Thanks Toby and David :)

nice memory...i even think in that time i was so young that i dont know jamiroquai lol
that song is a great message about the world we have, we never care so much about our planet.

Whoa!!! I remember my fisrt time LOL way back when,when I first stumbled across that first gem. Can't believe its been that long ago. TYTD definitly had an affect on my life & by the looks of things I wasn;t the only one. Guess once you've been touched by the FUNK its forever
Peace &to all you funksters out there may the funk be with you .

Hey ya'll! Did any of you see Dancing With The Stars in the U.S.? One of the stars danced to my song! "Cosmic Girl"! I can't find it on youtube...if you find it, please, let me [email protected]