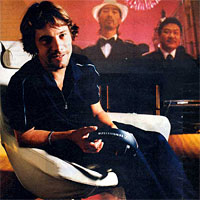 The Mail On Sunday newspaper (UK) today (Sunday) printed a two page article about Jay's home cinema setup in their "Night And Day Live" magazine.  In the article Jay says that he sometimes heads to Blockbuster to pick up movies rather than go out partying:

"I've had complaints from the record company saying that I've not been seen out enough lately.  I'm quite a solitary figure, and now this place has started to come together I'm using it for social occasions.  My record company would love it if I had a scrap with a photographer, but I can't be bothered any more.  Don't get me wrong, I love a good party, but I'd rather have one round here."

Earlier this year Jay's new home cinema was featured in a press release by JVC, the suppliers of his video projector.

That's funny you know, I was just scanning it in to submit to the site :P

More things that I'll never be able to afford in my future career as a journalist...thanks a lot David.LOL

Man that some wikid kit. I'd love to see an ephisode of Alan partridge on that screen!

I'm from Chicago and loved your show on 10-30. i'm a female and been a fan since your first album. I would love to meet you in person one day.