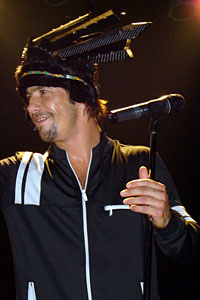 Jamiroquai have a few hours ago come off stage at the Kool Haus venue in Toronto, Canada after playing another fantastic concert.  Performing the same set list as in New York City on Tuesday to a sell out crowd of around 2000 people, here is how it went...

The next concert is at the Congress Theatre in Chicago on Sunday night.
Credit: Mark Grausam, Kim Pope

The show was AMAZING! The first time I've seen them live. Revolution 1993 -fantastic! Jay was having fun interacting with the crowd all night. He asked for some "skunk" because he had to ditch his at the border. Someone threw him a joint and he jumped down off the stage to get it. He also passed out gatorade to the front row. One of the best live shows I've seen. I wish I had it on CD. Did anyone go to the after party at the Century Room?

I got a Gatorade! My husband and I got pics with Sola and Matt as they were on their way out. I gave Jay my ROTC insert to sign with a note that said "where's the party at?" to which he comically wrote back, " IN MY PANTS!) Cheeky monkey!Rob, Sola and Matt were great, Rob gave my husband the pick he had been playing with...GREAT NIGHT - worth the 6 year wait! They were being skimpy with the after passes. We went to the club but didn't manage to get in. They only wanted to give them to "girls"!

Since it was presented by House of Blues if you had a Bell cellphone you could go in early, sit in the VIP lounge with food and drink. Jam and fans were great. Jay signed my Dynamite album. Followed his van to the Century Room. See you guys in March/April.

I wish I had known that! I have a Bell cellphone. For those asking when the show starts - The DJ spun until 9:30pm and the band came on at about 10pm. I can't wait to see them again in the spring. I'm glad they're realizng how much we've missed having them over here.

Wow! What an amazing party! I go to a lot of shows and I have to say Jamiroquai is by far one of the best live bands to see. Last night's crowd was excellent and really got into the music. I don't think I saw anyone NOT dancing the entire night. The room was full of love and good vibes. All in all it was a perfect showcase. My only *little* wish is that they would have played more old tunes, Mr. Moon anyone?
Cant wait for next time, I'll be there with bells on!

just got back to MI....made it into the century room...had a nice little chat with jay. awesome time...class act...best concert ever...

And Revolution seems to be the revolutionary track of this tour. It was an amazing when it was done at the UK gigs.

Everything was fab - the show, crowd, venue, and of course Jay's headgear! (can you call it a hat?)

David, could you convince the band to make another tour in 2006??? if they are too tired ti make one in the whole world, they can do it in europe :p
hihihi

at the toronto concert - jay said that they "will be back in march or april". then when I spoke with him at the after party - he confirmed it again...I even pushed for a detroit gig...

I'm going to the L.A. show-- I waivered on whether to go for the floor or the balcony when tix first went on sale, and I chose the balcony. My wife doesn't go to many shows with me, and we've had a couple of shows where she couldn't see the stage from floor (standing) seats, so I figured the balcony would be the better choice. At least when the balcony gets dancing, the floor is sloping, so hopefully she can still see! The L.A. show is the closer for the U.S. leg, so I think we could be in for a doozie of a show...

OMG! There was an after party!? When were they handing out passes? In the Mobility VIP room? Damn it! I downloaded a ringtone, but I immediately charged for the stage to get a good spot, then my friends went to check their coats. By the time they got back, there was a hoard around of like 50-75 people! I didn't see them till after the show, but it was so worth it! I would believe there were more than 2000 people there because looking back at the crowd, it went all the way on either side and all the way to the back bar.
I don't know where that guy gets his energy, but Jay's truly an icon. He's the white Godfather of Soul! LOL They need to be winning more awards, but it's sad that they base talent with the amount of albums sold. They should give more weight on the impact at their concerts, but then how do you quantify excitement and magic? Rob, Sola and Matt are complete wizards at creating atmosphere and environment. Simply amazing group! Can't wait till Spring! I'm gonna try and replicate Jay's hat (?), so watch out for that! Peace.

one last comment....are you sure they didn't play starchild in toronto??? could have sworn they did???

No they didn't play starchild, and i was a little pissed about that... just a little though cause everything else was amazing! That song is about me ya now!!!!lol, Anyway, I was about 4 rows back , dead center behind the tall dude with the fararri hat... i was the tanned skin with short curly brown hair. My first jami concert ever!!! i been listenin to them and been truly in love and inspired by there music sice i was ten..im 22 now and it fuckin blew my mind to finally... FINALLY see them live!!! wish i coulda got hooked up for the after party but unfortunately i had to leave kinda quickly so we couldnt even try our luck :( . Next time.. i must meet jay and the boys and just let them no how important their music is to me and others and how important their music is to , well, music! i no they heard it a million times but it must be done. Can;t wait to see em again , can't wait to meet em!!!! Rock on Jami!!!!!!! Still high from the show!!!

What was the dj's name that opened up for them on friday in the toronto show. ??? Someone lemme know please

There is a great review of the Toronto show from The Strand as follows...

Running on stage wearing a Roots Canada sweater and his trademark native headdress, Jay Kay was still able to enthral fans after a six year absence from Canada. One could tell that he was more than glad to be back in Toronto, as he cheerfully exclaimed "It's Friday night!" after nearly every song's completion. Perhaps as compensation for the impersonal environment of their 1999 show at the Molson Amphitheatre, Kay and the crew decided to play the Kool Haus this time around, which created a much more intimate feeling. This was evident by the crowd tossing up items such as t-shirts, hats, beer, and characteristic of Kay's beliefs, marijuana. As he put it: "I had to ditch everything at the border!" Kay even took CD sleeves from the audience and signed them during the band's back-stage breaks.

The audience was something else to behold. As a testament to Jamiroquai's universal appeal, there were grey-haired parents standing alongside teenaged fans as everyone danced together and had a great time. During the opening DJ act, one could sense the anticipation of the crowd of the sold out venue, as pre-sale tickets and public offerings had sold out in an instant.

Kay, along with a recently revamped eight piece backing band has been touring behind the new album Dynamite, which has been described as his most diverse work to date. With only two scheduled stops in Canada, Kay made every song count in his two and a half hour set, and put in enough energy to last Canada for a decade. The set itself was an eclectic mix of die-hard favourites from their debut album to a healthy dose of tracks from their latest effort, though there was a curious lack of "Virtual Insanity", arguably the band's most popular song. Crowd-pleasers included "Little L", "Space Cowboy", "Love Foolosophy", and "Canned Heat". The band, evidently very well practiced, played tight and fast with Kay giving hand signals at a frantic pace, however there was still room for jazz-like synth and drum solos. Every facet of the band was honed and most importantly, it was plain to see that every one of them was having fun. Kay displayed his notorious dance skills throughout the concert (despite his statement that his knees had become weak) with leaps, twirls and random break-dance moves. Although it seems he has lost his environmental ethics established during his first album, Kay still espoused the virtue of treating each other with "common decency" before he launched into a track from the new album, "(Don't) Give Hate A Chance". Finally, during the raucous one song encore, Kay and band crashed their way through (admittedly my favourite track) "Deeper Underground", with a minute long sing along of "I'm going, I'm going, I'm going deeper underground!" to end the night.

Despite negative press being slung around regarding Kay's activities during his long hiatus, fans of the band in Toronto could tell that he certainly wasn't touring for the money. There was a genuine love of the music and the fans that kept him going through the night and spurred him on such as a nearly ten minute rendition of "Alright". There is no doubt in my mind that Jamiroquai represents one of the most positive forces of music in the industry today, and when they return in April and May, I will be sure to attend.