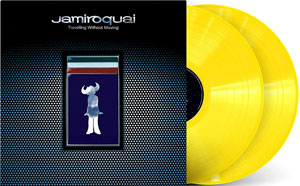 On 17th December Jamiroquai are releasing a special 25th anniversary edition of Travelling without Moving on vinyl.

"Travelling Without Moving; long considered one of Jamiroquai’s most popular albums and the best-selling funk album of all time celebrates it’s 25th year in 2021 with this special heavy weight coloured vinyl release.

Originally released in September 1996, the album features seminal hits ‘Virtual Insanity’ & Cosmic Girl’ which helped catapult it to #2 in the UK charts and Jamiroquai into the limelight globally.

This 25th anniversary edition includes an updated sleeve, new liner notes by Jamiroquai frontman JayKay and the Dimitri From Paris Remix Radio Edit of Cosmic Girl, previously only available physically in limited numbers on Dimitri From Paris’ own label."

The vinyl can be pre-ordered via these links - https://jamiroquai.lnk.to/TWM25Vinyl

Jamiroquai played at the Toronto Warehouse today in 1997.