Everybody's Going To The Moon release for Record Store Day 2021 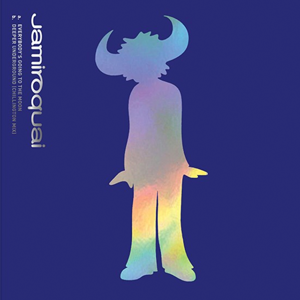 On 17th July a special Jamiroquai vinyl single of "Everybody's Going To The Moon" was released as part of Record Store Day 2021.

The single was released in celebration of Jamiroquai co-writer Toby Smith who sadly died in 2017.  The track appeared on some bonus editions of A Funk Odyssey back in 2001.

The release includes the following words written by Jay:

Hi everybody, it's been a terrible year for all of us, so here's something from the vaults that will hopefully cheer you up on this Record Store Day 2021. These are a couple of things that Toby & I did back in the day, on a heavy all night session at Chillington studio. We all miss him and his irreverent humour terribly, not to mention his broad talent. I hope you enjoy these old gems and I very much look forward to seeing everyone from the stage again, and bringing you a new album which we are working on, though it isn't easy under these circumstances. Wishing you all the very best, Jx

More information about the release can be found at the Record Store Day website and also here on the discography.

Jamiroquai played at the Toronto Warehouse today in 1997.