Jamiroquai.com - "We are making changes" 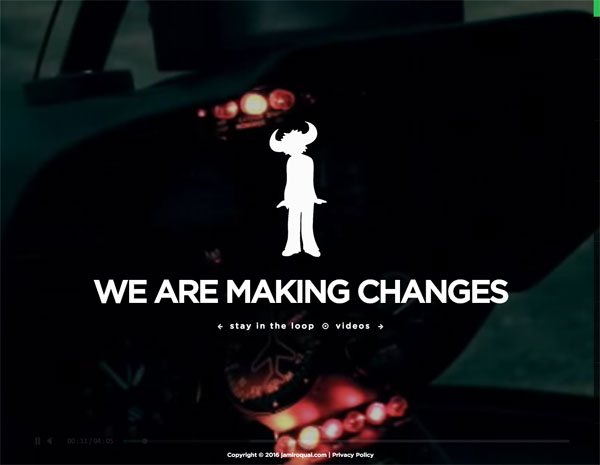 The official website at jamiroquai.com has at last been updated.  OK, it's not a complete new site but more of a holding page for a new site.  With the title "We are making changes" you are encouraged to sign up to a mailing list or watch a number of music videos from the band.

Aside from this update other things recently noticed online (keep an eye on jamirotalk and/or the jamiroquai 'reddit' for much more information) are that a music video was recently filmed and a number of possible track names have been found online.

Great!! Let's hope that during Christmas there'll be an official announcement

Yup the 8th Jamiroquai album news is flowing pretty good right now! Not to mention that new Official Site holding screen is darn cool, so happy things are FINALLY coming together 'promotion-wise' for the new album!

BTW, just a little update on those +13 potential song listings for new Jamiroquai songs, after some discussions with fellow fans on JamiroTalk, the songs "Night Out In The Jungle" & "Gettin' Down", have been agreed upon to being 'Leftover Rock Dust Light Star material'. "Gettin' Down" is a lyrical fragment that ended up in the tailend of the RDLS song "She's A Fast Persuader" & "Nights Out In The Jungle" apparently was on a list at JK's studio that a friend of avid Jamiroquai collector/fan Diamond_Doc saw that didn't end up making the album.

Massive thanks to my good pal David Rowe for supporting the r/Jamiroquai Subreddit over on Reddit (http://www.reddit.com/r/jamiroquai), I do my best to keep everyone there updated on the latest Jamiroquai news/discussions/fanpictures/etc.!

Hopefully we will be getting an '8th album announcement' before the end of 2016, fingers crossed! Cheers everyone & Happy Holidays Jamily!

Thanks Jamirofan!! Would it be a good idea to also bring out those leftover tapes? I understand that they follow not a certain commercial strategy but the fans would be happy with it, and how would it hurt?

also "Smile" was a leftover take from RDLS, and it was absolutely brilliant! Recently I read an article on an Italian magazine, and they said the next record is shifted at the beginning of 2017...not sure about the reasons of this delay..I guess it was "Panorama" magazine...