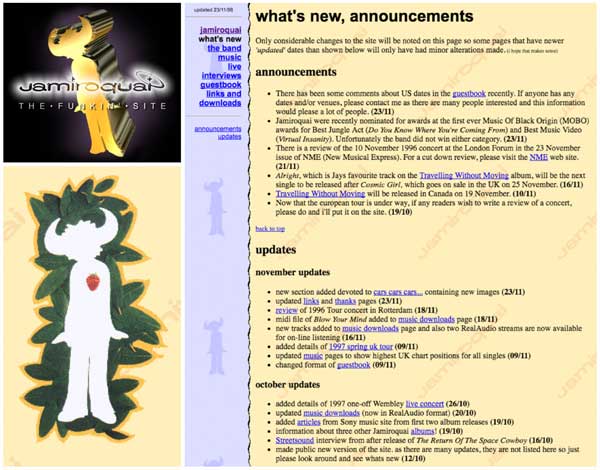 So, 20 years ago I made a little website about my favourite band.  I'm happy to say the band are still going (although they do seem to be increasing the time between albums) and by all accounts we'll be hearing some new music very soon and a new album to follow up 2010's Rock Dust Light Start later this year.  Exciting times are ahead.

I've been fortunate enough to have found myself in a position to help with the official website/facebook presence (I am currently no longer involved) and have been able to combine a passion of photography and Jamiroquai by having the opportunity to meet the band members, take photos at many concerts and ultimately see some photos in print in the Rock Dust Light Star tour book.  I also like that I took the official Jamiroquai Facebook page profile photo which has had in excess of 45,000 'likes'.  I've had so much fun.

Ten years ago a surprise party was held following the B-Live Festival in London where the band performed (at the Festival, not at the party!).  That was a great day (and night).

So, the site is still going -- it's just ticking over gently.  It hasn't evolved a great deal over the years and in fact has got simpler (i.e., less admin for me) when things like the voting and guestbook were removed.  A couple of years ago I made it mobile device friendly I don't add much news to the site but expect to be adding a bit more as the new single/album/tour information starts to appear over the coming months.

It just keeps going like an ever reliable friend.

If you're after a more regular fix of news about Jamiroquai and the bandmembers then this isn't the best place to go - head over to Jamirotalk or the Jamiroquai reddit - there's far more updates there than there are here.  But please come back every now and then :)

That really does 'blow my mind'. For the record David, if you could take only one Jamiroquai song to a desert island, which one would you choose?

Since 1996 following this webpage. Almost at the same as you started. We've had great night chatting and helping you with this page. Keep on the great work, Tiago!

Congrats David!! This site became the first which introduce me in this Jamiroquai addiction

Nice work David, your work throughout the years is much appreciated, and long may it continue!
All the best,
David H
Www.Facebook.com/groups/buffaloman

Hi David,
I took some time to think at what happened in my jami world since 1997. Lots of memories of live gigs, meetings, waiting together for new records, the news popping out here and everywhere on the internet...its been a crazy ride! Now that the community is not that active anymore, funkin.com is still up and running reminding us of the fun we had and maybe will have again!

Thanks a lot for this amazing resource and happy 20th birthday funkin.com!

Congrats David on 20 years of Funkin!

Thank You David, and Congratulations on 20 years. It is not easy keeping a website going for so long. It is almost a full time job, I know. You did a wonderful job, I use it for reference different releases almost every day. Great job, Cheers!

Dear David,
Thank You So Much for this site !
I've been on it since 2000 and it was THE reason why I took internet at the time !
Happy Birthday Funkin !

David,
Happy 20th Birthday! Years made me a clumsy old man, but made your funkin site cooler and smarter it seems. One thing I remember is that "Where Do We Go From Here?" was chosen as the best track in Synkronized through voting here. I was happy to see that many people visit this site have just the same idea with me! I'm looking forward to talking with you on the forthcoming album. Thank you.
From Japan.

Congrats David! Funkin will always have a place in my bookmarks bar, been visiting for 11 of these 20 years and looking forward to many more!

Congratulations! It's been a journey I'm proud to have followed for the big majority of those years :)

Keep up the good work lad. Been visiting this site for years for all the news.

Congrats, Dave. It has been always my personal jmq database. Hope it continues for a long time. Big ups from Chile!

20 years! Well a massive thank you to you and Sharon for your commitment, It has been greatly appreciated. Love you guys! x

Ali - in answer to your question it would have to be an old song. I'm thinking Blow Your Mind. (or Mr Moon, or Alright....). It's so difficult!

All great choices, but Alight gets my vote.

Hi David, thank you soooo much for everything - Jamiroquai should do a song about you!!! :)))

I recorded a video for you David & Sharon Rowe, happy 20th Anniversary The Funkin Site, so happy to have and continue to contribute to Funkin Site for the past 13 years! Cheers my friend!

All great choices, but Alight gets my vote.

Happy Birthday David !! And thank you so much for all your work:) I follow your website for many years now (can't believe it !) This is really really great that a new album is coming soon :D CHEERS

Great work over the years David, have been a follower of the site since the Dynamite era and long may it continue! With the upcoming album will be keeping a close eye on what's going on here! Thankyou!

The Jamiroquai community has been lucky to have you David, massive thanks for your efforts so far. Here's to the next 20!

This site has be invaluable to me over the years to give me my jamiroquai fix. Funkin.com first, then the official site second. Funkin will always be my first port of call. Long may it continue. Thank you David for all your hard work and determination to make Funkin a success. Roll on November cuz I need some new jamiroquai tunes....

20 years! I can't believe how fast that has passed.
Many thanks for your time and dedication David, i am sure a lot of people around the globe feel as glad as I do to keep visiting this corner of the internet.
Receive all my best from Mexico

Congratulations David! It has been a long ride and I appreciate your commitment. We are lucky to have someone like you! Cheers!

The Singles Collection, a Canadian 5 single wooden box set was released this week in 1997. In 1998, Deeper Underground was at number 1 in the UK singles chart.