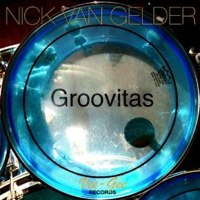 Nick van Gelder, one of the original members of Jamiroquai who played drums and guitar on the Emergency On Planet Earth album and also co-wrote the track If I Like It I Do It has just released a new album.

Groovitas is now available on iTunes where you can also listen to previews of the tracks online.

A little more information about Nick, his involvement with Jamiroquai and what he did since leaving the band can be read at his MySpace page and if you're a regular reader of funkin.com you'll probably already have seen the superb early live Jamiroquai live recordings he's posted on YouTube, but if not, then they are well worth a listen.

Nick really worked hard on this new album and it really doesn't disappoint. The album as a whole is a marvel to listen to, so if you love something fresh for your new music digestion, give Nick Van Gelder's new album 'Groovitas' a definite 'buy now!'. Cheers and great job on this brilliant album Nick! Will be purchasing my copy soon! ~JamiroFan2000~

GOLD as always Nick! Can't wait to buy my copy! Check out Nick's other releases too on iTunes!

I bought "Groovitas" on iTunes Australia yesterday and it is a brilliant album filled with sublime grooves :D

Today in 1999, Canned Heat, the first single from Synkronized, had its first play on UK radio. It wasn't long after that the track was at number 1 in the airplay charts.