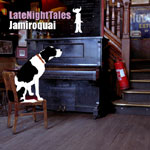 In November 2003, a compilation of tracks selected by Jay was released as part of the successful LateNightTales compilation series. The album consists of a number of tracks that showcase some of the influences that go behind the sounds of Jamiroquai that we all love. There's a great little video on YouTube available to watch/listen with short snippets of the tracks from the compilation.

The album has just been remastered and re-released and is now available on iTunes.  The main difference from the original CD release is that all the tracks are available in their full unmixed versions, but you also get the CD mix remastered as part of the digital bundle.

LateNightTales Jamiroquai is available now for purchase on iTunes.

Now let's give The Return of the Space Cowboy album a remaster and we'll be in business.

I would love a remaster of Space Cowboy, Emergency and TWM!!! it would be great!!

What's the point in remastering the old Jamiroquai albums ROTSC, EOPE & TWM? They will push up up the volume and probably make it clip and cause brick walling which will lose depth some of the that low end bass with is so important. They sound fine the way they are, we don't need them ruined like practically everything else which is remastered in this day and age. Death to the loudness wars!...

I don't think EOPE or TWM need any sort of remastering but there is no doubt that the levels on ROTSC are very low. Too low. Just put a mix of songs on a CD from all of the albums. As soon as any song from Return comes on you can barely hear it. It would not lose anything from a remastering including any of the low end bass. It will all still be there just like it is on the others albums. For some reason ROTSC was mastered very low in volume for CD. It's fine on it's own but when mixed in with other albums including EOPE (the album before it) it is blatantly apparent. I've never heard a vinyl LP edition of ROTSC so I don't know how the vinyl sounds. I do have the Space Cowbow vinyl single and it sounds fine. I've aways assumed it was just the CD release.

As big a fan as I am of Bruce Lee I never knew there was a theme for Enter The Dragon!!! Wow! I just youtube'd it and it's awesome!

I wonder if they keep in the bizare 8 minute spoken word section as the final track or see sense this time and omitt it. Either way, this is a great compiliation well worth buying.

Blow Your Mind was released as a single in Japan this week in 1993.