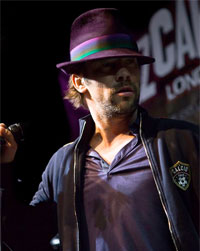 As part of the promotional work for Rock Dust Light Star the band have recently performed a few gigs in London.  I've been fortunate enough to go to some of these armed with my cameras to take photos for the bands website and facebook pages.  The most recent set of photos have just been uploaded so I wanted to post some links to them from here.

Starting with an excellent gig at the London Forum (Facebook photos) (where I saw the band first perform in November 1994) a couple of weeks ago, then last week the band were in a studio in North London for the BBC Radio 2 gig.  Facebook photos here.  I watched the soundcheck from both the main audience 'area' and also in the control room from which the audio was being mixed during its live transmission on the radio.  The gig was excellent and it was great to see and catch up with original Jamiroquai keyboard player Toby Smith who was there watching the show.

Back in London the following night we were at the Jazz Cafe - and what a superb gig it was.  There's plenty of video clips on YouTube which are well worth watching.  The band were on top form and seemed to love playing in such a small venue with no video/audio recordings being made for later broadcast.  They could just get on with the show and enjoy themselves.  For me it was great to meet a few people who knew who I was (I'm not hard to miss when I'm 1.92m tall and carrying a couple of big cameras!) and also catch up with some familiar faces.  Moving around near the stage for the first few tracks was really hard work and I'm sure I got in a few peoples way and trod on some feet but I hope the resulting photos make it worth it!  Getting a few new angles from above and behind the stage was pretty cool.  Facebook photos here.

I hope that I've managed to get a few alternative photos during these recent concerts (i.e., ones of not just Jay all the time!) although I do know that I've not got enough of Sola and the backing singers.  I'll try harder next time!  Enjoy.

great shots david! what kind of camera gear were you using?

Fantastic shots! What would we do without you David? Thank you so much for all you do:-)

Ben: I'm a Canon man, with my primary body being a 5DMkII taking pride of place in my camera bag. There's a 50D in there as well, and some nice lenses too :)

we love you david!!!!! :D
your photos look so " alive"...for us sad souls who cannot make it to the gigs have at least these wonderful photos!
thanks!

Great photos and the gigs were amazing.

Thanks for showing us the Jamiroworld through your lenses David! Simply marvellous, as always :)

Amazing pictures mate!!! I absolutly envy you! (in a good way of course) thanks for the hard work of givin' us this perfect shots, and keep us informed!!!

Incredible shots David. Great angles. Man, once again J sure is loving that jacket. Needs a good wash as seen in the last photo. Thanks David!

Brilliant work, David. Beside Jay YOU are our man! ;-)

Anybody know the setlist from Tuesday?

Fantabulous shots. So,from the description of yourself,you are easy to spot ! Hope to bump into you one day!. I'm a shrimp though and only 5 foot tall.I have found some photos of Kaufleuten ,Zurich on Tuesday on ch.tilllate.com/fr/photos/all.Jay had the flu according to the paper and they were all tired.Not surprising really.Hi to all especially the Swiss fans and David.

Thought i'd share this. Good to see the guys doing well accross Europe. They deserve to be higher in certain places (cough U.K, cough rubbish music dominates), but overall, they're doing well, as i'd expect. Great album, and with shows like this broadcasting, they're on top from.

Blow Your Mind was released as a single in Japan this week in 1993.