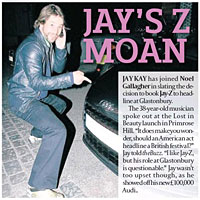 At the a party hosted by London beauty business Lost In Beauty, held earlier this week, Jay was there (the business is run by his make-up artist) and according to London newspaper TheLondonPaper he was there in a new car he'd purchased.  The article read..

JAY KAY has joined Noel Gallagher in slating the decision to book Jay-Z to headline at Glastonbury.The 38-year-old musician spoke out at the Lost in Beauty launch in Primrose Hill. "It does make you wonder, should an American act headline a British festival?" Jay told theBuzz. "I like Jay-Z, but his role at Glastonbury is questionable." Jay wasn’t too upset though, as he showed off his new 100,000 pound (GBP) Audi.

Jay was also spotted recently at the Ace Cafe in London (where he's been seen before). Some photos can be seen at the Rex Features website.

i guess the fact that ''the black superhero'' was announced to headline UK's the biggest - Glastonbury and O2 Wireless Festivals is logical after he was named Artist of the year by The Rolling Stones, his album sold out tour in UK etc..

last year Beastie Boys took over the Brit festivals, now it's Jay Z - yeah, scary new trend for Brit artists ..; )) Coachella is on contrary lined up with Euro acts , i think it's a good thing acctualy ..
;)

" his role at Glastonbury is questionable ". I have other words to express this...

I don't think it was Jay-Z's call to headline the British festivities anyway...there is however A LOT OF MONEY INVESTED IN JAY-Z. We're talking New York Yankees Baseball sized money.

That car is incredible! :)
Im happy to see jay happy ^^

A Funk Odyssey dropped one place to number two in the UK album chart today in 2001.