Sola Akingbola - Routes to Roots - the story behind the album 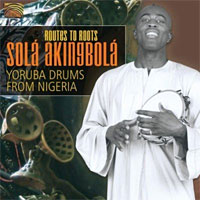 With the release of Sola Akingbola's Routes to Roots album I asked him if he could let us know a little bit more about the album and what it means to him.  This is what Sola told me...

This album came out of the question - "Where are the Yoruba Drummers in the global fraternity of Drummers?"  The cultural influence of the Yorubas in the diaspora runs very deep.

The sound, the groove, the swing in my playing is rooted in the style of traditional Yoruba drummers I grew up listening to as a boy.

My dream has always been to play along side these amazing players.

This album is a dream come true and an honour.The ground work led me to places in my cultural tradition that were full of surprises and inspired more questions than answers.  Philosophical, Historical, Religious and Musical.I hope this album will seduce young drummers in Yorubaland and the diaspora to delve deeper into their pre-Islamic/Christian musical history.The music of the Yorubas is in the language, the language is inseparable from the drums.  No other groove can reach my heart, hands and feet like this one.If I can transfer a fraction of that to the listeners, I'll be a happy man.

More information about the album can be found at the ARC Music website.

In addition to the ARC website, the album is available now to download from iTunes UK (and other international iTunes music stores).  The physical CD can be ordered from stores including ARC Music, Amazon.co.uk and HMV.com, where it has an official UK release date of 19 November.

Beautifully complex in which I'm finding myself peeling back the layers, and disecting the sounds.
Put on your Sony MDR-CD180's, and play some soccer listening to 'Kulumbu Yeye' givin' the volume some gun!
Wicked Sola!

GOOD news and Thanks for all the good vibes SOLA .
much love and peace

Yes Sola at long last the tunes have reached us!!!!!!
Fantastic tunes and you can feel the history of the music in these tunes. We can not thank you enough for making us more aware of your influences and sounds, Fantastic album i love it love love it!!!!!!!!!!!!

The Singles Collection, a Canadian 5 single wooden box set was released this week in 1997. In 1998, Deeper Underground was at number 1 in the UK singles chart.