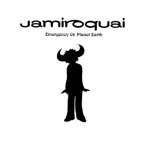 After the success of the signed funkin.com t-shirt charity auction held in June of this year, a new auction has just started to raise money for the same charity - Macmillan Cancer Support.

The item listed at eBay is the Emergency On Planet Earth CD album - signed by Jay Kay and Stuart Zender.

"The album that sparked both Jamiroquai and SZ’s career. The youthful Stuart had managed to earn himself some serious credit and interest with his involvement and bass playing. When he admitted he’d only been playing bass for two years before the album was released, the sound of jaws dropping was no doubt audible. He became a bass icon practically overnight" www.stuartzender.co.uk The insert from Emergency on Planet Earth was originally signed by Jay Kay on 25th October 2006 prior to the BBC's Electric Proms performance at the Jazz Cafe.  The insert was signed by Stuart Zender after Mark Ronson's performance at The Pyramids, Portsmouth, 22nd October 2007.

The auction is listed at eBay and ends on 22 November.

The butterfly has landed !!!

Congrats Russ for this good thought, I'm going to bid... :)

:) Thanks for the support - nice price already! HUGE THANKS to Russ for taking the time to put this on ebay and supporting the cause.
x

Wow. One of a kind, peace and blessings to those supporting the charity!

mice one! i hope it gets a deserved prize
the history attached to the item is nice too (and the explanation of how to find me in the photo too!)
;-)