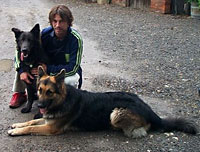 The following news has been posted today at the Official Jamiroquai website:

"We were all saddened to hear that one of Jay's beloved dogs, Luger, had to be put to sleep yesterday following an ongoing illness.  The ten year old German Shepherd suffered from Motor Neurone disease. He was always there to greet guests at the house and was a permanent fixture in the studio where Jay rehearsed and recorded. He will be sorely missed by everyone."

Back in November 2005 The Sun newspaper reported that Jay had considered flying back from a promotional tour in Australia to look after Luger, who had only recently fallen ill.

Poor jay! i'm very very sad!As we know jay loves so much his dogs! he really will be missed by everyone...

yeaaa poor dog , it reminds me of my dog who died also... he was poisoned ;( and it was a labrador ;(;( I cried alot back then

very sad...Jay your dog will be missed! I always love to hear that a animal was always there to greet guests, my cat does that, and it's so great to know that they are like a part of the family...~JGrizz

when my friend's dog cry i just cant stop cry with her so i cant ston to crying now!!!!!

Considering he was suffering from a serious illness it was for the better. But it doesn't make it any easier on Jay (or Titan for that matter) who just lost a family member. Because that's how close we become with our pets. Especially with animals like cats, dogs and birds. They have personalities just like humans.

Sorry for his loss, like said before the loss of an animal is heavy. Sometimes you are closer to them then to family.
But happy that Jay had the time to be home and say goodbye to a good friend.

Oh Jay ,so sorry to hear that .How is your other dog ?

now jay must be very sad

maybe he writes a song about his dog...

I'd be really sad if my cat died and ive only had it 8 yrs . Is Jays other dog called Titan? Anyway sorry to hear about your dog. Sorry im bad in these situations

IM VERY SAD FOR THAT :(
LUGER WAS A GREAT DOG TO JAY.
I WISH JAY WILL BE ALRIGHT, TOO.

im sorry to hear that,
it's just like losing one of the family and my thoughts go out to Jay And of course Titan.
It makes me feel guilty for what i said in the previous announcement- although i was angry about a gig experience and wasnt meaning to be insensitive.

All I want to say is why God why.

very sorry to hear about the loss, he seemed very loyal to jay...everyone in the band must feel very upset about that him no longer being there...just a day ago he must have been barking or wagging his tail
:(

Jay - my heart goes out to you - I know how much Luger meant to you and what a great dad you were to him. He had such a great life with you as you loved him so much - I know you must be feeling really low at the moment, but all our thoughts are with you :)

hope the best for jay and titan now

Awwww i feel so sorry and i can totally symphasise cos if i lost my cat i couldn't even imagine it. My thoughts are with Jay and Titan. Such sad, sad news.

Sorry to hear that.

what it means to loose a pet is something only people can understand who lost one once..
sorry..

I'm so sorry and sad! I felt very empty and distraught when I lost my lovely dog and sometimes I still have these feelings!
As Samantha said, I'm sure Luger had a beautiful life with you Jay and I'm also sure he was very proud to be your dog!

i'm so sorry, I know how does it feels when a beloved pet has gone.

Just like Barbaro, JK was smart enough to know when enough is enough and to not let the dog suffer. My condolances, I dread the day I might have to do that to my Rocky-Boy

@ Sandriche, I second that.
Rest In Peace, Luger.

I could be your Luger if you want Jay ...Anyway I share your sadness :( and hope you are well.

there's nothing to say the pain is gonna be so big that no words can help..one can say it is better for him not to soffer but anyway x J. it will be terrible, what I always say is that I wanna stop breathing before my dog ( is cilly but hey!) ..I hope the fact that we all understand his pain and stay close will help a bit!

Sad news, losing a pet is not easy i know. I kind of feel sad for Titan too - they must have been close companions.

Same thing happened to my German Sheperd... its very sad but theres nothing else to do.. you see the dog crawling and gettin injures because of that and its very sad.

Don't worry, Lugar is on the moon now. And if the time machine ever gets invented, I personally will go back and bring that dog to the future for Jay.

Dear Jay, all my support to you. Now Ludger is etternally happy.

What a lucky dog to have had such a priviledged life. He was so loved and cared for, sorry he has gone, hope J feels better soon.

well i'm really sorry for your loss i know how it feels when you loose a pet especially a dog.remember he'll live on in your heart!
my thoughts are with you,and i hope you get better soon

I'm so sorry.
But He was so lucky dog. Lots of love was given Jay and many friends. He run and run at the Heaven now.

You never think how attached you are to your pets until they go. They're like a constant. I still can't get used to it and my baby died two years ago. We got her cremated and scattered her ashes at her favorite walking spot. And now I'm starting to cry. Condolences. It's the hardest choice in the world.

Which one is Luger in the photo?

luger is the one laying on the ground

I'm really very sorry. Luger gonna miss all of us. Hope JK is supported at the moment, it's pretty tough...

JamiroquaiChile want to tell you that it’s a shame what have happened with your dog. We hope this sadness gets away soon.
Anyway we’re sure that after leave this world, Luger was so happy receiving your love and care.

Its hard losing a loved one even if its a dog... its like losing a member of your own family. I hope Titan is ok. Give him lots of attention Jay.
Gutted for you !

Hey Jay,
I just had to say bye to my cat, Max, recently after living with him for 12 years and I want to say Thanks to you and the band for giving him good tunes to enjoy.. Max jammed to "Use the Force" and wanted me to pick him up and dance with him to it. Max and Luger lived good lives with us Aye? Here's to Max and Luger!!

Jay and Titan,
So sorry to hear about Luger. I know he will be missed but always in your hearts.

So sorry to hear of your loss.
x