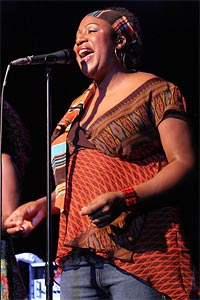 We've seen most of the "core" Jamiroquai bandmembers having web and MySpace sites over the past couple of years and now its time for the backing singers - starting with the fabulous Samantha Smith...

Samantha first performed with Jamiroquai at the Sony BMG conference in Los Angeles in January 2005, and after singing backing vocals on Electric Mistress on the Dynamite album has been with the band on tour ever since.  Prior to Jamiroquai she's sung for a truly outstanding list of artists including Gloria Gaynor, Beverley Knight, Blur, James Brown, Depeche Mode, Lynden David Hall, Sting and Luther Vandross.

In between all of these artists, Samantha has also sung with the London Community Gospel Choir for 21 years (ever since she was born ;), and her super smooth vocals can be found on no less than eight of their albums.

As the current round of touring and promotion for Jamiroquai's Dynamite and High Times albums comes to a close, Samantha has found a home at myspace.com/sammysmith1 where you can find out more about her and post messages and comments.

But no myspace for me, I'm censored beyond belief, so I will leave my best wishes for Sam here on funkin.

cool i like her work
the back singers are importants, they give a feeling at the songs...cooll, i like to see sam here

She's also a very nice person - Do your thing Sam!

I didn't know she worked with James Brown how cool is that. Thats her second best gig after Jamiroquai at top. I'm adding her to friends. Is Saudi bad for censorship?
EDDI :-)

Will be adding Sam as a friend on myspace page too, i'm a big fan of hers as i am for everyone in the band lol! Well once i'm free of work i will be!

There all very nice people.

You are great Sam!!! (I have a photo with you, in GAOU last summer) and I hope send you in my next jamirogig in Spain.

I'll visit the space of Sam. The list of the artists is impressive, she worked, no still working with excellents musicians. It's awesome !