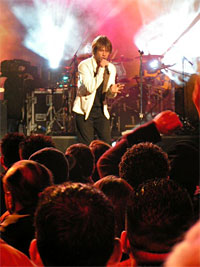 On Friday morning GMTV (UK) broadcast an interview with Jay, recorded earlier in the week at the Petersen Automotive Museum in Los Angeles.  Jay spoke about some of the cars that are stored at the museum and also did a little promotion for the current single, which was released in the UK this week.

Following the Jimmy Kimmel Live television show broadcast on Thursday night , a number of photos from the performance are now available at the 1iota.com website.

DivX videos both the performance of Seven Days In Sunny June for Jimmy Kimmel Live and the GMTV interview are now available on the downloads page.

Thanks David! You're so fast! It's a good performance but I prefer Jay Leno performance: The drum sounds better (Different snare drum), the guitar is less high and the bass is more present, more powerfull. But It's a great performance of SDISJ, as usual. I hope they'll put online soon the entire show with all the songs in a good video and audio quality. It will be fantastic! One day perhaps...

Thanks David for being so quick...

Thanks David. That was brilliant. Absolutely superb. Makes my withdrawal symptons from the summer gigs worse though!
cheers.