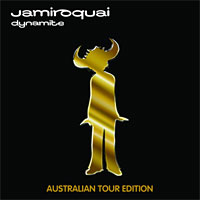 On 13 November, a special 2 disc "Australian Tour Edition" of Dynamite was released (in Australia), together with the new style buffalo man cover artwork.

The album looks like the standard Australian 11 track release of Dynamite (i.e., without Time Won't Wait), and the second CD contains the following remixes:

The Australian Tour Edition of Dynamite can be ordered from stores including Sanity and HMV.
Credit: David Packer, Tim Peel

The Japanese tour edition has time wont wait on it!!But its almost £30 to get it shipped over. Does anyone know where you can get it from, where its al little less expensive?

This really doesn't have anything to do with the remixes, but I'll write it all the same. There's alot talk about 'Time Won't Wait' throughout different threads, and I personally, the song just doesn't do it for me. The album should (and in some parts of the world does) end with Hot Tequila Brown. After listening to the flow, and track order of the album almost everyday, 'HTB' was the perfect lick and feel to close Dynamite. However, if it was included as a 'hidden' bonus, like Do you know...? and Funktion... it would have been a little different. I know the whole lyrical content stands strong for a lot of people out there achieving and reaching their dreams, but it causes somewhat of a sacrifice to the album. ROTSC ended beautifully with the album version of the same title allowing everyone to get hazed. But didn't the U.S version open with the album title?, and closed on a 'heavy note'? Maybe it's just me running on feeling the music as opposed to listening to the music. Well, I said my part, from a sunny afternoon in Mexico City.
Over, but not out.
zed.