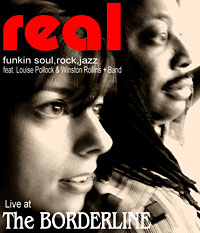 Real, the band which features ex-Jamiroquai members Winston Rollins and Simon Carter are playing a concert at the Borderline in London this coming Wednesday (5 October), and if you want to hear some funky tunes and you're in Central London then you will not be disappointed.

This site first reported about the band back in February following a small gig they performed.  Since then they have completed their album and are ready to showcase the tracks this week.

More details about Real and this week's gig can be found at www.real-home.co.uk, and I hope to see some of you there on Wednesday night.