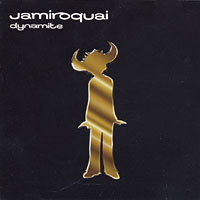 This is a reminder that Tuesday 20 September North America sees the release of Dynamite.  The album, which is available from all good record stores (including the Sony Music Store), is presented in CD and DualDisc formats.

The CD contains the regular album, including the track Time Won't Wait (previously only available on the UK/Japanese releases), and the DualDisc (CD/DVD) version contains the following:

The album also contains new cover artwork exclusive to the US release of Dynamite.

For those interested, the DVD is in NTSC format and is region free (region 0).

Release of Dynamite, forthcoming Us tour, new cover with buffalo, Time won't wait on Dynamite, well It seems that Jay and Sony really want to be on top for the american fans! You're lucky! Cheers

Anyone know how to get a copy in the UK?

You can order it from the US Amazon (www.amazon.com) and some things (like CDs) they will ship to UK, or I'm sure the UK Amazon will have it on their website as an Import (could be more expensive though!).

anyone know if its going to be available in Canada as well, or if its just in the US?

Uhhhh, that cover is bleeding awful! Photoshop for dummies!!!!

We will be seeing them at The Roxy in Boston, MA! We can't wait. We also caught them on the second show at Wembley in London during March, 2002. This will be a tiny venue which is good.

fyi - the roll bounce soundtrack came out on the 20th also....good times!
the dvd part of this is dual disk is great. the making of the video cracks me up. jay as a woman.....ha!

Just bought the dual disc version of the cd last night. The making of the "Feels Just Like It Should" video was cool! And Jay's comments while dressed as a woman at the end were hilarious!

King For A Day was released as a single this week in 1999.