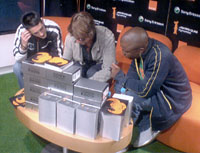 On Wednesday 14 September Jay helped launch the Sony Ericsson K600i mobile phone in London.  In addition to a press photocall, Jay and Derrick were there to sign copies of the album, postcards, the phone, or anything else that fans brought along.

Here are links to some photos from official photo agencies that covered the appearance - Wireimage, Filmmagic, Abaca Press, Planet Xposure , and WENN.

In addition to the official photos, here are a few fan photos courtesy of Richard Harris and Charlotte.

Finally, do not forget that funkin.com is currently running a competition to win a Sony Ericsson K600i phone.

It was amazing to meet Jay and Derrick, i showed Jay my Buffalo man tattoo on my back and he seemed to like it,my dream has come true. I cried like a little girl after i met them.

I had a wonderful time, and then caught my flight back to Geneva. I was in seventh heaven when I left. I would like to thank everybody who was there for making it such a memorable day.

There are additional photos at Bruno Press:

(Thanks to Samantha Yemm)