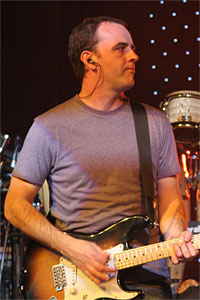 Jamiroquai guitarist Rob Harris has just launched his own website at www.rob-harris.co.uk.  This is the first Jamiroquai bandmember website since Sola launched his website in early 2002.

The website will be getting bigger and better over time but right now it has some great pictures, and some fantastic audio of tracks that he has been working on with people such as Matt Johnson and Sola Akingbola, with two of the tracks having been written during a writing session for Dynamite in Costa Rica.  There is also a section which details what sound equipment he has both at home and on tour with Jamiroquai. Rob has also added a "Questions & Answers" section to the site where he says "This area is for you to post any questions you may have, I'll try to answer them as quickly as possible..."

*adds to fave list* Rob is gr8! He played to teh crowd so much in the Manx gig, hes so damn talented

what a guy! he is one funky player! will be checking this site out just abit!! he was fab at manchetser gig! spesh when he stuck his tongue out at the crowd! woo hoo!

Congratulations Rob for this site. You are now more near of us !

Please, don´t forget visit www.jamirolive.com, we are here a Rob´s Zone ¿do you remember Albacete gig?

GREAT!!!I LOVE THAT MAN!!I HOPE TO DOWNLOAD MANY LIVE STUFF THAT I HAVENT HEARD BEFORE FROM JAMIROQUAI!

Great idea Rob! Your site is superb. I try to sent him a mail but It doesn't work...

me to..maybe later it will work..