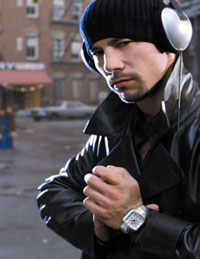 Watch publication Europa Star has a story about the watch Jay wears in the Feels Just Like It Should promo video - the "Style" model by watch and jewelery company Breil.  Part of the news item reads:

Once again Breil gives its name to an important and awaited musical event. In the video which heralds the return of one of the trendiest groups in recent years, Jay Kay, the icon of urban cool, has chosen to wear one of Breil’s hits: Style, the watch that epitomises his sophisticated yet unconventional and unique style.

Frames taken from the video will be the theme for a press campaign and advertising material designed for Breil sales outlets on the main European markets and in Australia. The campaign will be on air from June until December 2005. Style, the watch worn by Jay Kay, is Breil’s leading model this season. Just like Jay Kay, Style is a trendsetter. In fact the new Breil watch has revolutionised the traditional shape of watches to bring us a strong-impact square look that emphasises once again the decisive and innovative character which is the brand’s trademark. With this new union Breil proves yet again its ability to ride the leading international trends, thanks also to the choice of strategic partnerships in the world of music, design, sport and fashion.

NICE WATCH!
I couldn't be trusted with that...I've lost and/or broken my last three timepieces. XD

i gonna try to take a pic of the video when he had the watch...is one of the details, like the mercury old car and the funny ''show'' when the nerd jump to be jayson kay.

Jamiroquai picked up the award for "Outstanding Song Collection" at the Ivor Novello awards held in London today in 1999. In 2000 it was more of a sporting day when Jay put a team forward including his security guard and Sola Akingbola for the annual charity Soccer Six tournament held in London. After a gruelling penalty shootout, the band failed to make it past the quarter finals into the final four.