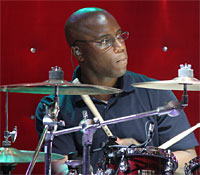 Jamiroquai drummer Derrick McKenzie and percussionist Sola Akingbola will be performing at the London International Music Show '09 being held in London between 11 and 14 June.

Derrick and Sola will be performing on Saturday 13 June as part of the Drummer Live series of events and their session is described as follows:

"Drummer Derrick McKenzie and percussionist Sola Akingbola together are the driving force behind the beats grooves and moves of Jamiroquai. They will be playing both their own material and Jamiroquai tracks as well as explaining how they work together in and outside the studio."

More information about Drummer Live and the London International Music Show '09 can be found at londoninternationalmusicshow.com.

UPDATE (20 May 09): Derrick and Sola are now performing on 14 June.  See the website for more information.

will try to drag my brother along to that!

Why do I live so far away???!!!
If I could be there I would; That is great news!
Mon congrats-to both Derrick and Sola.
All the best!