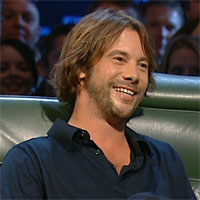 Following up on the previous news that Jay was going to appear on BBC television motoring show Top Gear to take part in the "Star In A Reasonably Priced Car" feature (to try and regain his crown from Simon Cowell) the show was broadcast on Sunday evening in the UK.

After an interview about Jay's car collection and showing the footage of Jay's driving on the racing track (in a Chevrolet Lacetti), it was announced (to much delight from Jay!) that Jay drove the fastest lap on the track and is back at the top of the celebrity leaderboard.  His time was 1 minute, 45.8 seconds - beating Simon Cowell's time by 0.1 of a second!

If you're in the UK the show should be available to watch for a limited time using the BBC iPlayer or if you want to download an xvid clip from the show, head over to the downloads page.

that was so funny! he so wanted to beat cowell lmao

Congratulations Jay! I knew he would do it:) Does anyone know when will this air on BBC America?

I said it on the last thread.. but well done Jay A.K.A Mr Record Breaker ;)

Well done! We all knew he could do it! Teach that Simon Cowell a lesson...his x-factor does my head in for 5 months lol!

Thanks for the fast video upload David!

HE, IS, THE, BEST!
Thanks for the video. It's excellent!

HUGE thanks David for the upload - greatly appreciated :) :) :)

Nice one Jay!
Love the dance

Amazing lap and loved the celebrations!

The control into the 2nd to last corner was immense. He must have shaved a whole second there and then off Cowell's time!!

you did amazing!! and twirled like no other :)
congrtz

i think it is airing tonight 8 eastern on bbca

I think I'm the only one who thinks that his twirled dance was rather and exaggerated...Jay, stop behaving like a child!

I just watched the clip on youtube....but whats the car he's driving?

Congratulations from Argentina!!!!! I knew you could do it from the begining, Jay is a SPEED FREAK!!!!!!!! Kisses

Well said, Pat! Exactly what I was thinking (and all that swearing...) But then, I'm a schoolteacher...

A Funk Odyssey dropped one place to number two in the UK album chart today in 2001.