Rob Harris to perform at alloutguitarFEST 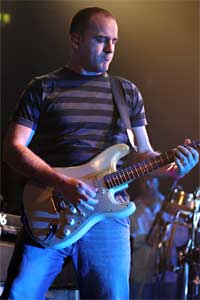 Jamiroquai guitarist Rob Harris has been confirmed as one of the special guests at the alloutguitarFEST "All Day Concert Spectacular" being held on 16 September in Northampton, England.

The event is being held to celebrate the first anniversary of online guitar magazine alloutguitar.com.  The event will feature "some of the UK's greatest guitarists uniting to perform in an unashamed celebration of virtuoso guitar playing with amazing instrumentals, classic songs and great vocals!"

uh the description sounds good :)
show them what you got rob!

Fantastic! rock out rob!..
would be great to see this event..

congrats, show em your skillz rob!! :)
maybe we get some utube action of this eventually.

On This Day... 3rd December