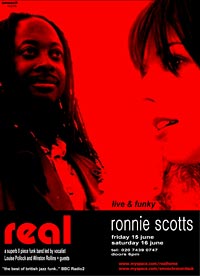 REAL, the band set up by ex-Jamiroquai band member Winston Rollins are performing two gigs at the world famous Ronnie Scotts jazz club in London's Soho on June 15 and 16.

For more information about their releases and next months gigs at Ronnie Scotts in London, check out their page at MySpace.

Brilliant! Thanks for the info David :)

wow! i wish to go to that gig! good luck to winston, sola and the rest ;-)

so when does the world tour starts?

Great gigs...If I were in London, I'd definitely check it out. (heart) sola!

Sounds so good... I would go but I've been lucky enough to win tickts to another gig tonight at the Jazz Cafe.

yer cool.
im off to see them in birmmingham at the jazz festival in July.
Got to do this one and make it a double funky time as corduroy are on the following night at the Jazz cafe!
Louise Pollock is from my home town - Ellesmere Port!

D'oh. I thought it was tonight. Maybe I can go after all.

Are you going to the brum one steve?
or both? lol!
there album is wicked - trust me.

Am looking forward to it! (Deesh, wish you were here!)

Wont be going to brum, but I hope to make it to Ronnie Scotts. Need to check Real out in a live setting..and get their album soon too

In 2000, Jamiroquai performed King For A Day at the NRJ music awards in Cannes, France and Sola Akingbola had to play the drums as regular drummer Derrick McKenzie was on his honeymoon. In 2002, Jamiroquai played a concert at the Indoor Stadium in Singapore.