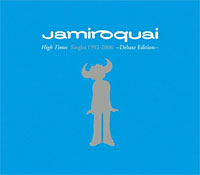 After originally announcing the release last month, 28 March sees a Japanese only "Deluxe Edition" release of the High Times: Singles 1992-2006 greatest hits album appear in the shops. In addition to the regular greatest hits album (Japanese edition - including Half The Man), a second disc containing the following remixes is included:  The catalogue number is of EICP-758 and can be bought from sites such as CD Japan, Amazon.co.jp and on import from Amazon.com.  Surely this must be the last "edition" of the greatest hits album to be released...

Love the artwork as well! No trace of the buffalo man on the UK release!

Yeah, that's something I need to update in the FAQ section about the buffalo man not being on the UK release. I think the Japanese release will just be a cardboard sleeve over the top of the regular Japanese album, but in a double-cd case with the remix CD and a different "obi" strip.

I placed an order from amazon.com for it so I will wait and see for sure in a few weeks when it turns up.

i still couldn't get the money to get any of the HT releases and they are still releasing more! it's crazy, my list goes on and on!

I placed a pre-order for it a few weeks ago with cd japan so i will let you know what comes.
As for the Dynamite remix it is the same as on the UK bonus remix disk - phil asher remix aka restless souls.

Awesome I was waiting to buy HT until something like this.....good and bad news though, just because I haven't bought any of the HT releases yet, and yes there are so many now!!! I like the blue......it's cool it looks old school......which is nice.

maybe the buffaloman is more iconic over there in Japan...

the feel so good mix is fantastic if you haven't heard it yet i would like to get it and might if i can get some cash together but when you already have all the tracks buying a cd feels like a waste of money :S

Is there anywhere I can here this Feel So Good mix? I have the double CD UK version, but it doesn't have that mix on there...

It's the knee deep remix found on Fjlis UK cd single.(the black one)

I have the knee deep remix on vinyl. I'm my opinion it's one of the best remixes of Jamiroquai I've ever heard!

I am highly confused at the Virtual Insanity remix. Is the remixer Salaam Remi? Because I'm seeing Saleem Remi printed on the cover? Are there 2 Remi's or is this a typo?

I've probably got it wrong, but I think its Salaam, and there's a typo on the tracklisting at cdjapan. I think my validation of this was to search funkin for both names and see which came out the most!

All good sweetie, I was referring to the actual release. Russ posted a picture of it at Jamirotalk and it clearly says, 'SalEEm Remi'. It stuck out because I'm a big fan of SaLAAM Remi. Not a huge deal, but honestly - someone in distribution, editing or something should have checked that BEFORE it went out to the public.

Unless there is a Saleem Remi and I just don't know him or Salaam produced under the name Saleem at one point.