Gig In The Sky officially announced 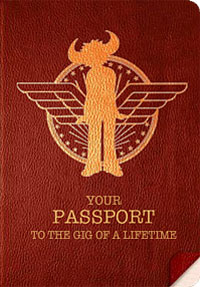 Jamiroquai.com has confirmed details about the "Gig In The Sky" promotional event being held in conjunction with Sony Ericsson that is taking place on 27 February.

"...Sony Ericsson is customising a specially chartered plane - ripping out seats and creating a stage to make sure the plane is ready to rock to some first class music. This fantastic event also includes a luxury after party with another live Jamiroquai performance with hotel accomodation at the secret European destination and your return flight home the next day."

More information and a link to the competition to win tickets can be found at Jamiroquai.com.

Additionally, according to a press release that has been posted on the forums at Jamiroquai.com, the gig should be available to watch later in the year...

"Sony Ericsson customers who don’t get the chance to board the gig in person will still be able to attend in spirit when the event is made available as an exclusive download via their new Walkman phone later in the year."

There is also more information about the fact that the gig is trying to break a world record for the worlds "Highest ever Concert"...

"The exhilarating musical feast is also attempting to go down in the record books as the world's 'Highest ever Concert', with an official Guinness World Record adjudicator present on the jet to judge this attempt. Fingers crossed 'Gig in the Sky' will reach the optimum height set down in the strict guidelines that have been put in place."

For the full text of the press release please visit the Jam Party People Forum.

Somebody has the same problem?

There is certainly a problem in submitting your entry. I also have an error message, but a different one. Let's hope that this world record will be a safe one!

I just bought a Sony Ericsson (K610i) for X-Mas and my boyfriend owns a Walkman by Sony Ericsson too, we are both great fans of Jamiroquai (we met thanks to the french Strongroom forum ^^) so WE MUST WIN !! See you there ! :)))

cheers david,
will you be boarding this jet???

excellent.. just to europe people.. I with you the best jamirofans =)
I would like to be there but i cant :(

I really hope the winners are fans that haven't had the chance to see Jamiroquai in concert yet...especially those that don't have the finances and means to attend a concert or travel to see them.

Thanks Deesha im entering ive been a proper fan now for 3 years and was on holiday for B LIve and Lovebox too young for the electric proms and away the night they were in manchester. I finding out details and am well entering

Sorry, but I'm going to whine. This totally blows that we Yanks can't enter. What do they think, just cause Jamiroquai isn't huge in the US that there are no fans. Thanks a lot Sony! Guess what, Sony isn't popular here either.

Russ: I'd love to board the jet. Maybe I should ask them if they need the services of a friendly photographer (at their expense of course!).

Bagsy on being the tea lady!

Yeah, im having problems registering too! what's goin on?!?

It took me ages to register and to enter....keep trying guys!

David: It'd be really interesting (from my point of view) to hear what your actual involvement with Jamiroquai is. We know you run this site, help out on jamiroquai.com and seem to know a couple of the band members quite well, but is there anything else?

I mean, outside of the band itself, I doubt anyone generates more interest in them than you through funkin.com. Surely Jay knows that as well! If I were you, I'd be slightly disgruntled if at the end of the day, Jay didn't buy you a Ferrari himself because no doubt you've helped him earn a few of his cars by keeping the interest super-strong in the group!

A free ride on the gig in the sky should be the least of what they give you!

Oh yeah, well done in the cricket as well... haha. You can guess I'm an Aussie.

@ David: if u need a photoshopper assistant LOL!

they should let us jumping from the plane when the concert is over! :-p

hey david - good idea - maybe someone is needed to make a mini movie for the fans? lol

I wasn't able to find the deadline before which to take part in the contest ? Does somebody know it ? It would be too bad to miss it !

(sorry for my poor english, I had a hard day and I'm tired!)

The registrations annoying do you have to have a sony erricson phone or something. DAvid you should probably be the first on that plane the amount of support you given the band, hell i'd even clean the plane afterwards just get me on

Good look for all (specially for me!!!)

your exits are here, here and here but hey why would you want an exit???
ive finally entered , probably too many times now but at least i have!

Good point your bringing up HW, I totally agree in that David should attend this extreme plane concert......if any fan, it surely are to be him!

I can't activate my account either. It keeps coming up failed after I click any of the links from the email sent to my hotmail account. Does anyone have any suggestions?

Unfortunately i canÂ´t get into the competition, good luck to the others fans... I would love to be there...

I would die of happiness if I won this contest!!!

electro logo ..the dead line is 31st january (23.59 GMT)...the winners will be contacted between 1st and 5th of february.

I'm in! But I'm pretty sure I'll be eliminated once they discover that I'm a Swede pretending to be located in the UK. :D

Can't blame a guy for trying though... Who wouldn't want to join Jamiroquai when they're making history.

Davis has to be on that plane, we need a diferent point of view from SONY! our point of view!! Space Clav ...tell them you had to go back in sweden suddently :)))
Good luck everyone..I wish this plane was a huge one to have space for us all.

Oh man this is killing me, for some reason its not signing me up! After i enter the wonderfull sentence i came up with and enter all my details it keeps saying "malformed comma seperated string", what the hell? can someone help me with this? it really is killing me. no really. it is.

Meike you're an angel!!! Thank you so much! This close from going berserk :p. God bless you. Hope you win! (and me too offcourse)

(correction)
I'm feeling blue...I'm too sad we beleave we can't entry the competition from Japan!!!!
Am I correct?

I can not enter either, and I am in the US. I think it is only for the United Kingdom ????

yes, me too, in australia and cant enter... and if i had to i'd fly to england within 24hours for something like this!

Brenda, if you do win the competition, can you leave me the tickets in your will please?

would people be able to smoke during flight?

Maybe Mr. Rowe would enjoy an 'incentive' to keep the site going like a Ferrari, and Sharon might go for something a little more leisurely like one of those Audis.

In flight-smoking ??? I suppose that's not really going to be allowed, but who is going to storm the bogs when 'Sir' JK sneaks off to light up ???

My Registration doesnÂ´t go through.I tried so often.
"Object reference not set to an instance of object"
What does thet mean

Okay I would die of happiness after the concert

But the people on that plane better be huge Jamiroquai fans!!! No half-asses!

please, somebody sneak a video camera!

Good luck to all of those who enter the competition. Being in the US, I can't participate either, but I do hope that fans who have not been able to win any of the previous competitions get the chance to win this time around. Nothing against the ones who have been lucky enough in the past, just want to see the love spread around to more fans... much love to all and good luck!!

So nice to funk at funkin - and may all your high times being higher than a pig in space.

Gosh!! I'd love so much to participate!!!
Hope that those of you who will "fly higher" in the gig, hope you can record it and share it afterwards! hehe!! Have mercy of those of us who will not be able to attend!!!!!

damn i live in australia so i can't enter. I'd give my right arm to be on that plane (though i'm not sure how i'd pass my degree without my writing arm). i am a uk citizen though, do you think that counts? i'd fly to the uk no matter what it costs if i could get on that plane. hey, i heard that they're going to price fast cars off the road in Europe within the next five years. Does that include the uk? i think it's good but i bet J won't be too pleased.

I thought that he was taking a year off and coming back in 2008. So why are they doing this special gig?

wow
this is something i never imagine...anyways i dont like planes...i love boats, even when the water is not my place...the sky is not so good for me...lol

Has anyon whos entered had a cinfirmation email yet? Mine's not come through.

On This Day... 7th December