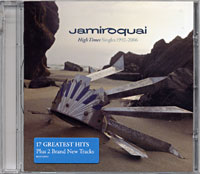 In the UK Official 2006 Albums Top 100 chart, High Times: Singles 1992-2006 was placed at number 27 with sales of 544,000 copies.  The album was in the chart for eight weeks.  Only eight other albums that had been in the chart for less weeks charted higher than Jamiroquai.

For those interested, the top position in the chart was filled by Snow Patrol and their album entitled Eyes Open, which spent 35 weeks in the album chart and sold over 1.5 million copies.

For being there only from November, I think that's pretty decent!!!

Well done. Congrats to the band.

i agree that is a good position i do think however it will be one of those albums that lingers in the charts for months to come. well done jami :)

Congratulatios Jamiroquai! ;) is the best

Let's face it, surely it would have done a lot better if more original material were included. On the other hand, I guess it did great for being a "best of..."

disappointed!!!! when u think of the sales of twm

congratulations well done and continue so dont stop! travelling without moving....ciao from Italy

On This Day... 7th December