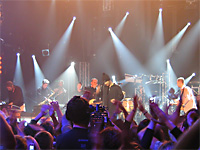 In the early hours of Saturday morning, Channel 4 (UK) broadcast The Album Chart Show.  Only Runaway was broadcast from the six-track set that Jamiroquai recorded on 20 November.  The video of Runaway is currently available on the downloads page of this site.

On 10 december at 00:25, a 30 minute "Album Chart Show Special" will broadcast on Channel 4 (UK) which will contain more tracks from the recording.  Later the same morning (at 01:40), 30 minutes from the 2005 Clapham Common B-Live concert will be broadcast.

Like your christmas style. I thought it was a good proformance of runaway but the program was rubbish compared to later with jools holland if they want to compete or make fans of whoever is playing happy they should extend by at least half an hour and each artist play at least twice.

Didn't bother sticking around to see the whole show, left after i'd seen what i was wating for and it was worth the little wait, it was amazing. Can't wait to see the other tracks next week. On another note Jay was on top form on Vernon's show lol! Oh and btw love the x-mas theme making me want to put my tree up now :-)

And excellent artwork in the web!

Sounds like you guys got screwed. Only one track?

David, cool theme. Reminds me that I need to get some Christmas lights for my dorm room now.

Damn, I wish he hadn't smoked so much in the past. His voice sounds crap tbh. Hope the rest of the show sounds better (the band is doing great though, and I'm happy the brass section is there again).

agree with eddi, they should be on jools holland as usual but they don't seem to be this year?
although they will be on - live at abbey road next jan with a live recording but no studio audience.
i don't understand why they didn't headline this show instead of jarvis who was even worse when he was with pulp if that's possible.

david has always a fitting "decoration" !
itÂ´sÂ´always so refreshing :D

Bit harsh rob..his voice has changed/matured fom his younger days as it would do regardless of smoking...I love his voice

Rob had a good point, his voice has changed, still sounds excellent dont get me wrong, but he needs to kick the smoking in the bud! it aint good for your vocals & he would only sound better.... that was also an excellent live performance, it went off! thanks David for the uplaod.

He was angry like hell .But whatever makes you
sing your heart out , it's ok for me .
People are no machines .

Jay looked really pumped! The best live version of Runaway yet!! Loved it.