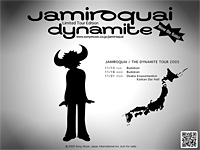 Sony Music Japan have created a new screensaver to promote the current Japanese tour.  The screensaver is similar to the ones created earlier this year to promote Dynamite, but also feature an animated map of Japan and details of the concerts (apart from Sunday's Osaka concert) that make up the Japanese leg of the tour.

In addition to the screensaver, a number of photographs from the concert held on Tuesday (15 November) are available on the Sony Music Japan blog website.