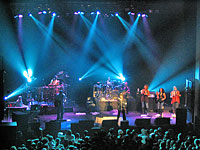 Here is the set list from Thursday nights concert at the Metropolis in Montreal, Canada:

This is almost the same as the second New York City concert (Don't Give Hate A Chance was not played here).

During the concert Jay also mentioned to the crowd that the band plan to be back in Montreal during March or April 2006.

AWESOME PARTY! Can't wait to see him again in spring 2006.

I have been a Jay fan for years and have seen several concerts. Unfortunately the sound last night was the worst I have ever experienced for any concert. What's up? Note to sound engineer - take off your head phones and listen to the true sound of the hall - and realize the crap you made us listen to.

Jean: thanks for the comments about the sound. I wonder if it will be mentioned in any tour diary updates in the coming days...

I was first row, right in front of him. BEST SHOW EVER!!!!

3 of us drove up from Ottawa, Canada to see the show. I personnally had been waiting for a chance at seeing Jamiroquai live for a very long time (since Emergency on Planet Earth...). What an awesome time!!! I was very impressed by the musicians as well as Jays vocal and entertaining capabilities. The Metropolis has to be the coolest venue for shows in eastern Canada. Thank god this show wasn't at the Bell Centre... And although I also heard comments about the sound, like many others, my friends and I found ways to enhance our own sound...
Will defenitely be there for the next show...

Whatta a party! Amazing time ! This was the second time i see Jamiroquai at the Metropolis in Montreal and it was absolutly electrifying! The musicians were amazingly and Jay-Kay's performance brilliant ! I wan more ! I need more ! I'll defenetly go see them again in march 2006!!! And happy to see they keep there promises...cant waite to see Jay-Kay's sexy smile again !

I'm going to the T.O Show tonight - did they go on right at 9 in MTL or was there an opener. I don't want to risk missing even a second of the show!

I was expecting also Jamiroquai. But the show wasn't as I expected... I expected a lot worst! I agree with Jean. The sound wasn't so great, but to see one of my favorite group playing in front of me... I realy don't care about the sound. You know, a show, is a opportunity for a deaf person to listen music... I just can't wait for april! Wow! WOOOHHOO!

Madblitizzle: So far there hasn't been an opening band although there may be a DJ. Apparently in Montreal last night they came on around 8:30. I say get there early!

The show was totally AWESOME!!!! When Jay said that they'll be back in March-April everybody went mad! And when people were doing body surfing (very pacificaly), Jay started to laugh like if it was the first time he saw this in a show! Very good show, props to the light and sound wasn't that bad :p

Thanks David. If the doors open at 8pm, I don't imagine they would start a 1/2 hour later. Don't want to risk it though - thanks for the info!

The show was absolutly freakin' amazing !! These guys can really lift up a crowd ! This was my 2d Jamiroquai show and surely not the last ! Jay and his gang have amazing shomanship ! They better come back to Montreal soon as Jay promised ! :-)

Really enjoyed the show, the atmosphere was awesome, really raucus crowd (i think i caught 4 or 5 crowd surfers) and you could tell the band was startled at how much the fans missed them. I have to admit that, having seen the '99 show (being the greatest concert I've ever been to), the sound and lights weren't as impressive this time around (Supersonic was devastating...). However, the issues weren't as bad as some people have made them out to be and they really didnt take away from the experience of seeing Jay and the guys up close and personal in Metropolis (4 people from the stage). The only thing I would have liked to have seen was a little shout out to Montreal in the form of a cover of Miss You, in 99 they literally brought down the house with that one and the band had to start up the song again after they finished because the crowd kept chanting "wooo whoo whooo oohh ooh..."... maybe in march! 6 years! As Jay said "Its definitely been too long..."

Wow! 16 songs at Montreal too. I hope they keep this pace up just in time for Chi-town on Sunday. Sounds like another excellent show.

My first time seeing Jamiroquai and I must say, it was an absolute blast! Wasn't sure how it would be, but it was worth plenty worth the price. Woooohoo. His signature spin move is nice to watch, hehe.

Him saying they'll be coming back again early next year was definitely GREAT news, can't wait. :)

absolutely amazing..... I was just by the speakers and now my ears are killing me .... I had to cover my ears during deeper underground , But it was sooooo worth it!!!
guys you are the best please be back soooon!!!!

We drove up to Montreal for the concert from Nova Scotia and New Brunswick. We have been huge fans for years and years and were stoked to be in the 2nd row!!! The crowd was rockin and JK was amAzIng not to mention super sexy! The whole band was SUPER fantastic! Definitely our highlight of the Year.... Can't wait for next time! WICKED!

The show was amazing. My only dream was to see them on stage... and I did... I was with my mom and we had a really great time. Almost everybody was signing and dancing. I hope that everybody enjoyed the show!!

I really enjoyed the show... some tunes were missing, but what are you gonna do. I think Jamiroquai should release a live album.

Having a live album released it an excellent idea! I enjoyed the show from the begining till the end. It was my first time seeing them and what an investment it was buying a ticket to see them! Jay Kay has an amazing voice. You guys rock (funk)!! Hope we'll see you again in Spring...

the show was GREAT! Jay was lucid and articulate...he looked in PEACE but ready to FUNK OUT too! in 99 he was very tired looking and though that was a good show the 2005 version was far superior! only
regret was that he didn't do "Feels Just like it Should"...the sound was fine Mr. Soundman!

Well, having travelled pretty much halfway across the continent (I'm from SK), I have to say that seeing one's favourite band live, from the very front, was pretty much the fulfillment of my life's goal. It was FUNKIN AWESOME.I think I can die happy now. : )

I didn't go to the show but i sure wish I did! I'll be there next time, front row center!!!

i saw the show and it was great! and jay said he is coming back to montreal next year! the music was great i wish he did play more music from his dynamite album.The band was great the fans were great there was body surfing in the concert hall!I can not wait to see them again.I got a lot of nice pictures which i do not mind sharing with the the funkin.com so when i am able to i will send these pictures to this site.peace and love to all of you guys.you can also find me at jamiroquai's home site as jkblack.until next time.

Amazing concert!!!! I am an old fan of Jamiroquai....since EOPE. For me the best song they played was Revolution 1993...brilliant!!!! The smoking interval was also very enjoyable! Sound wasn't that bad I found it better than the last concert they played in Montreal back in 1999. Too bad Jamiroquai's studio music is not recorded live...They are amazing live - more jazzy sound, much better than the previous 3 albums especially!! Very special also because they played Return of the Space Cowboy!! One of my favourite Jami tracks!! I will definetely catch them the next time they come to Montreal.....ciao ciao...