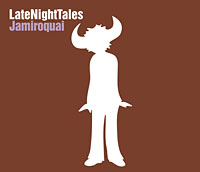 On 26 September a special edition re-release of the excellent Jamiroquai LateNightTales compilation album together with new artwork will be released by Azuli records (UK).  They write...

"To celebrate the upcoming Jamiroquai World tour which visits everywhere from Manchester to Melbourne to Milan and plenty more cities in between, their converted Late Night Tales compilation has been re-released with new limited edition embossed artwork. This strictly limited run of the album is sure to be a winner with collectors and those that missed out the first time round."

"The funk driven, strings heavy and groove building selection provide a real insight into the band that has developed a worldwide fan base over the past decade. As you may expect from the Jamiroquai sound we know so well, it’s crammed full of sweetness where tracks like the Pointer Sister’s ‘Happiness’, sit alongside Marvin Gaye’s unforgettable ‘Here, my dear’. It’s a selection that is both thoughtful and classically essential for any soul / jazz / funk / disco lover. It’ll certainly have you wide awake with a smile on your face thorough those twilight hours."

The album will be available to order from the Azuli.com website but we will be running a competition here at funkin.com to win copies of the album, and for the first prize winner, a framed copy of the album artwork.  Stay tuned to funkin.com over the coming days for more details of this exclusive competition.

liking the embossed artwork for the cover! heres hoping i have a chance of winning a copy from this funky website! keep all the good work up guys!!!

Very good album with many Jamiroquai's influences! Bass and horns everywhere!!! And this new artwork, hummmmmmm... Buffalo man is back!!! Cheers

latenighttales is a great compilation album!
i hope to win a copy of this one with this cool new artwork as the 26th is my birthday!!!

Wow, I never expected this!

If I don't win one then I'm gonna buy one for sure!

somebody here know if the album will be released outside the uk?i want buy in argentina but is veryu hard to find...