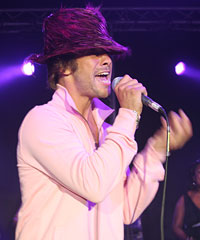 On Thursday night Jamiroquai performed a set lasting approximately one and a half hours in front of a crowd of around 700 people at the launch party for the new Sony Ericsson W800i Walkman phone.  The venue was the Shepherds Bush Pavilion in London (two doors from the Shepherds Bush Empire venue) and the place was filled to capacity.

The band played a mix of old and new tracks, ranging from Revolution 1993 and Use The Force, all the way to the present day with Dynamite, Seven Days In Sunny June and the first live performance of Time Won't Wait. A cover version of the Jimi Hendrix classic Crosstown Traffic was also performed.

In the coming days expect a gallery of photos from the event at the official Jamiroquai website.

CROSSTOWN TRAFFIC!!!! I can't believe that!! It's a great surprise from the band and I want to heard this version ( even if I think that no version is better than Hendrix's version) Anyway, It's a great news! David, do you think that we could have a video of this performance or it's just a dream ?

Yeah! I really want to hear this performance!!!!!!!

Oh my god the gig was funkin amazing!!! Crosstown Traffic agreed, it was amazing cover... Loved it when JK was singing into the mic lead when it fell out!! Luckily for me i was close enough to still hear him sing it! When is the vid of the gig available Dave?

wish i could have been there, and i think jay is really brave to have gone thru all dat and come out a better person

Crosstown Traffic? That must have been one hell of a surprise from the band!

It was just an amazing night. Stone Puppet...is that who I think it does...Space Cowboy? :D.

Everything about the night was brilliant.

I was at the front for the whole time, could not believe how close I was to Jay, I felt so special being a part of the gig, doubt I will ever have that experience again... amazing
(anyone see the pissed bird keep trying to get on stage, well funny)

For all the luckiest people who were and enjoyed the show: Could you give us the setlist, if you remember, of this amazing night? Cheers and Keep on Funkin!!!

Funkadelic - I think it was:

But I may have got the order wrong - and I feel like I've missed out a song!

It was an absolutely, unbelievable experience. I think the fans who went were incredibly lucky. I'm trying to thing what the high-light for me was - and I can't - there wasn't one - it was all amazing.

I think I loved Dynamite the best - I love the part when you can just go mental to the chorus!

It was an experience none of the fans who went will ever forget - it just epitomised what being a fan is all about.

The pissed bird during Cosmic Girl? LOL. The security guys were sort-of going "is she supposed to be there? She's the bez type dancer?" --- then she got carried off!

I'm going crazy - I have no-one to talk to about the good!!! I need to dissect and analyse every song with someone - relive the moments :D. My cats are getting bored with hearing about it.

Any of you guys who went - my msn is [email protected]

lol and i can't even type today - David could you give us and "edit" facility!!! my typos are terrible!

Will we ever listen to this live????

If only Jamiroquai was live friendly...

we should have something like http://www.incubusbootlegs.com/ for this band.

Thanks very much Msp for the setlist!!! It seems to be a Fabulous concert. Just another question: What can you say about the cover Crosstown Traffic? Is it close to the original? What does Matt play on this song? How was Jay's voice? Thanks for all :)

The cover was amazing - Jay put his heart and soul into singing it - he really put everything he had.

I am going to admit something - I really am a Hendrix newbie, only really listened to Hendrix in the last year - and have even been listening to loads of Hendrix lately BUT I didn't even know it was a Hendrix song! I knew the song - but just didn't make the connection - if I had I think I would have concentrated more on how the band were playing the song.

All I've listened to (in my awake time) is the set list (as I think it was) and I've included Crosstown Traffic (original) and all I can say is that I think Jamiroquai's cover was pretty amazing - Paul would have had to play very oustanding on this song? To cover a master songwriter and Bass Player's song was a huge task and I think it was pulled off 100%.

If it's any help - it was very very good and made me dance and shake my head around in a lunatic manner! It was very rocky and I loved it :D.

Feel free to ask any questions - although I'm afraid my answers may not be very good!

Jay's voice was brilliant through-out, he was totally focused and into the performance - as all the band members were- Paul's face was just amazing to watch - I think someone has said this before but i'll repeat it - he really does fit so well into the set-up.

I was very lucky to win tickets and I wish I could give you a better idea of how awesome the perfomance was.

Don't worry Msp, You answer is perfect and make me feel like if I was in the concert!!! Thanks and I hope you've enjoyed it!!! Stay funky :)

oh shit! time wont wait and crosstown traffic?? lets hope this is a sign of whats to come for their mini US tour :)

I was lucky enough to win tickets and it was the most amazing night EVER! So mad to be so close to the man himself and the crowd were the best I've known. Awesome awesome night that I'll never forget....also have some bad quality camera phone photos that everyone in my office is now completely sick of seeing!!