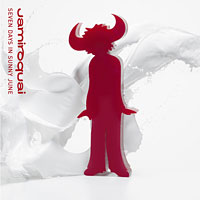 The official site has announced artwork and track listings for each of the UK formats of Seven Days In Sunny June, which is released in the UK on 15 August.

In addition to the remixes already announced, a new "Blackbeard" remix makes it onto the CD-Maxi release.  This is a super cool chilled out remix of Seven Days, which I feel complements the original album version.

The single is available to pre-order now from the Jamiroquai shop, and also sites including Amazon.co.uk (CD1, CD2).

Beautiful covers! "To be a Genius, be simple"
Funky time!!!

Excellent and innovative cover, yet it would have been better to release this on June since the song is SEVEN DAYS IN SUNNY "JUNE" but marketing is marketing. Anyways go for it Jay!!! You Rule!!!