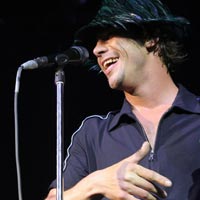 The official Jamiroquai site has just put online over 20 photos that I took at the Dynamite launch party that was held in London on Tuesday night.  I hope you enjoy the photos and expect to see more pictures from concerts and gigs over the coming months!

In addition to the photos, the site announced that:

"This was the last gig for Chris Barton, who for over 10 years has been traveling the world looking after the stage monitor sound (which is what the band members hear whilst performing) so we have to thank him for all his hard work over the years."

Between Chris and Rick Pope, everyone who has been to a Jamiroquai gig has a lot to thank them for, as they're the main people responsible for making the sound at every Jamiroquai gig sound so good.