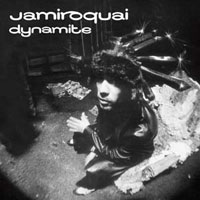 The shop at the official site is now displaying the artwork that Sanity and HMV in Australia have this week been using for the cover of Dynamite.

This is the second album cover with a photograph of Jay on the front cover (A Funk Odyssey was the other), and the second cover that is (or at least looks) printed in black and white (Emergency On Planet Earth was first).

The shop at the official site is also running a prize draw for UK residents... "Pre-Order the CD or Vinyl to be entered into the prize draw to win a perspex Space Cowboy" (which is the buffalo man from the cover of the Feels Just Like It Should single artwork).  Additionally, "500 lucky people will get a fantastic Jamiroquai logo keyring with their album!"

Credit: Mark Witney (for spotting an error in the original news item!)

In 1997, Jamiroquai appeared on the Japanese television show Hey! Hey! Hey! In 2002 the band played a concert at the Convention and Exhibition Centre in Hong Kong.