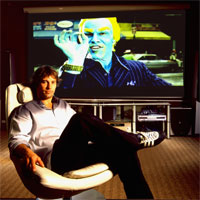 After recent work carried out on his Buckinghamshire Manor house, Jay has recently had a state of the art home cinema installed - which was specified by Jamiroquai sound engineer Rick Pope.

The heart of the system is the JVC DLA-HD2K Projector, with this and the rest of Jay's setup described at the JVC website.  As part of the JVC press release Jay says:

"After filming my new video clip, "Feels Just Like it Should", I can watch it in The Cinema using the best technology and best format possible. The image quality and feel of the image projected from the JVC HD2K projector is stunning. As you can imagine, when any of my musician friends visit, there is an immediate cinema festival – playing the many wondrous games, internet surfing and watching videos. The true testimonial to the attractiveness of any home cinema happened when my non-musical friends stopped by. With all that amazing picture quality and content at their fingertips, they always gravitate to the ultra-cool home cinema system. I also use the system to chill out and relax when I am not touring or recording. In my house, this is where a true home cinema experience happens. It's my favourite room in the house!"

In 1997, Jamiroquai appeared on the Japanese television show Hey! Hey! Hey! In 2002 the band played a concert at the Convention and Exhibition Centre in Hong Kong.