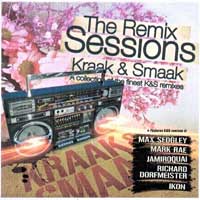 Dutch remixers Kraak & Smaak recently released an album of their mixes called 'The Remix Sessions', and it includes two remixes that they have done for Jamiroquai.

Already released in Europe, the album is being released in the USA on 22 May.  On the double disc CD you can find their mixes of Electric Mistress and Seven Days In Sunny June.

there is one on ebay at the moment.

I wonder how good their mixes of other artists are? Has anyone heard any of their other stuff?

Kraak&Smaak are amazing! Their remixes are cool but their own songs are even better... you can go to http://www.kraaksmaak.com/ you can listen to their songs. Enjoy it
X

You can listen to selected songs from the album including Electric Mistress in the last link that David posted (Giant Step).

Space Cowboy, the title track from the second album entered the UK singles chart at number 17 today in 1994.