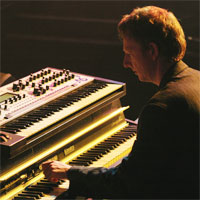 After unconfirmed rumours and confusion earlier this year, Jamiroquai keyboard player Matt Johnson has now been confirmed as one of the artists playing at the Antwerp Harbour Jazz & Soul Festival being held in Antwerp, Belgium on 12th May.

Matt will be performing as part of the Cleo & The Antwerp Harbour All Stars act.  The festival website writes the following about Matt:

For the last 5 years Matt has been writing, recording and performing in the band Jamiroquai. He co-wrote 9 of the songs on the last record. Before that he was mostly writing and producing artists including Kim Mazelle and Alexia.  Future plans include working on the next Jamiroquai album and writing with an up and coming new artist.

More information about the festival can be found at the Antwerp Harbour Jazz & Soul Festival website.

If somebody can, please record at least anything, if not everything from this perfomance! I wanna see it just because of MJ on the keys! I'd love to go to the fest and see him live, but you know how things are over here... Can't step outside my own apartment without a visa...

Did he confirm he'll be there this time?

Yes, he confirmed it to me.

Thank you David, hope there are still tickets available.
Unfortunately I won't be able to record it(no equipment to do so)...
But I'll send you some good funk'n vibes through "etherspace" (As if I could?)

On This Day... 3rd December