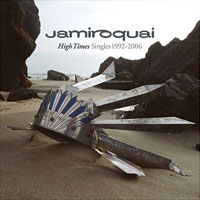 A number of US-based websites have announced details of US releases of the High Times greatest hits album - which will be in stores on 14 November.

The CD release looks like the 19 track version released in most other countries (apart from Japan which gets Half The Man as a bonus track) and is available for pre-order from stores such as Amazon, Circuit City and Best Buy.

DVD-wise, Circuit City and Best Buy are listing a DVD for release on the same day but currently don't provide any tracklisting details.

I was just about to share this piece of information.
We should be able to pre-order the greatest hits from Amazon now. If you search for "Jamiroquai" under DVD category on amazon.com, you'll get two entries, one with the "official" cover but the item is listed as unavailable, the other w/o cover but is available for pre-order at US $13.99. The tentative available date is Nov. 14, 2006. On the Canadian site (amazon.ca), the DVD is available for pre-order at CD$20.29. On the site it says the title will be release on Nov. 7, 2006.
Both sounds too good to be true but I've placed an order anyway.

Thank you so much for the additional information Sapphiremartinis, you do your fellow fans proud. Totally excited about this release info I discovered, definitely will be a great November for all U.S. Fans! Thanks again sister Sapphire! ~JamiroFan2000~

Great information, I'm going to buy the CD and the DVD! :D

Great news! I was getting bummed out about all this talk of 'High Times' and the DVD with no news on an US release. Can't wait! Thanks

anybody can help me? how can I buy the japanese version of the HighTimes DVD with no troubles with the language? I visited the official jp site but I really wasn't able to understand most of it... Mostly, will it be a region-free dvd or not?...

Your best bet will be to be it on ebay-usually Japan is compatible with the US. Just make sure it is NTSC format.

So excited to hear of US dates!!!!
Thanks for letting us know!!

thanks a lot to VIP11, I already thought to buy it on ebay but how can I know the real price in Japan? PAL and NTSC are good for me but I can only read "all regions" or "region 2" dvds that are often not compatible with the U.S.
Ok, I'll try! ...I'll probably wait for a while looking for it on ebay day by day!...
ciao!

I am so glad news came out about the US release. I was getting a little concerned.

Billboard and IGN are reporting it coming out on November 21st - but I just called the Best Buy near me and they still say 14th...Maybe it's pushed up and the USA press release doesn't reflect that. Guess we'll see!