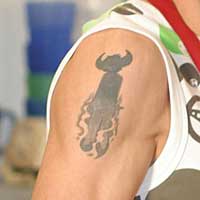 It seems that over the years many Jamiroquai fans have got themselves buffalo man tattoos to show their respect and appreciation of Jamiroquai.  Well, if you watch childrens television in Israel then you may have noticed that one of the characters in the sitcom show Pigamot [Hebrew] (which translates to "The Pijama's") has a buffalo man tattoo on his arm, which gets lots of on-air visibility!

The show is about a really bad rock band (that part has no similarity with Jamiroquai!) and the guy with the tattoo (Oded) is the bands drummer.  The show is currently broadcast on the childrens channel, but they have recently finished filming the fourth season of episodes which will broadcast on Channel 2 - one of the largest channels in Isreal.

Have you seen any references to Jamiroquai in television shows recently?  Heard a bit of Jamiroquai background music, seen any logos, talk of the band, etc. etc.  Why not post a message as a comment to this news item and tell the world!

How did you come across that? I seen refrences to JAmiroquai on TV lately. While flicking through channels on monday or tuesday there was two people dancing to canned heat on blue peter.

Oded!!!!!
Wot a great surprise!!!!
hehheheh! Yours has been a nice introduction on MSN chat to redirect me at funkin !!!!
Kewl tatoo and wonderful wot u do x children ;)
Luv, Francesca ;)

The other week when I was watching my favorite show "Girfriends", one character mentioned the band as being another character's child name.The child's name is Jabari but the other character (Toni) always gets his name mixed up with all kinds of things that are hilarious.It really surprised me because I'd never picture anyone on the show saying Jamiroquai...

They used FJLIS as the music that some strippers were dancing to in an episode of CSI which recently aired in Europe :)

they used fjlis for the intro into game 6 of the nba western conference finals between the mavs and suns....GO MAVS!

I saw like 3 or 4 Buffalo Man pictures on the wall of a "bedroom" in a program (very bad I must say) called Incognito,I was so amazed when my brother said "Is that the buffalo man??" and OMG!! it was the buffalo man hehe =) ..it was great !!! xD

I here alot of Jamiroquai being played in the background of MTV shows all the time...If only the tracks got the Justice they deserve.

Can anyone decipher or explain to me what BM is doing in the picture above on the bicep of the drummer please.

I think BM tattoos should be made standard issue at every neonatal unit across the world. That way every child in life will get a good start pointed in the right direction to find the meaning in life of the funk filled silhouette that they have been stuck with.

The ongoing edition of "So you think you can dance" show in the U.S. is using an edited version of "Canned Heat" in its closing titles.

On VH1 here in the States they always play Jamiroquai songs, especially the instrumental of FJLIS, in the background of these shows that comment on various celebrities' lifestyles. It doesn't really go with the topics that are being discussed on the shows but I don't care its nice to hear Jamiroquai anywhere.

looks like his tattoo went bad, maybe its the heat? lol

In France,there is a very popular program called "Turbo".This program is focused on...CARS and at the time of car test,there is often Jamiroquai background music(the "Turbo" sound editor is certainly a huge JMQ fan)

Little H: An excellent idea (a sort of King Herod in reverse lol). As to your question, it looks worryingly like the BM is doing some kind of RiverDance hop in the air with one leg behind him?! I do hope I'm wrong.

I think I heard Don't Give Hate A Chance played immediately at the end of one of England's World Cup warm up games at Old Trafford... come on boys!

it was really a great show
(me being a big fan from heidi and jamiroquai ;) )

Oded! I think your tatoo is awsome! It looks great (and sure looks like you've been working out!).
I hope your show is doing well, and keep up the JK love! Maybe it'll do Israel good and Jamiroquai will come visit! AMEN TO THAT!

this is somewhat of a loose jamiroquai reference...

but in the online mmorpg computer game 'world of warcraft' they give each race it's own dance. there's an expansion pack coming out in the next few months with 2 new races, one of which does the napolean dynamite dance napolean did to canned heat.

@ Funky Cowboy: Thanks. Yeah, I thought the same, or like he'd put his left foot in a cow pat and was trying to shake the excess off.

It's not a bad tat though, and a considerable sized one too. Salutations to ODED !!!

i occasionally here a jamiroquai song behind some news items in canberra, especially behind the sports headline stuff

that ODED must be quite built hehehe! but the tattoo does look good on him

for those who havent seen that part take a look and enjoy hahahahaha and learn how to DAnce !!!
www.youtube.com/watch?v=jY98yg2

Is this not scraping the barrel a little bit. Big deal, a tattoo. I heard Virtual Insanity in a supermarket, so what?

Yeah Gina!!! That's why M6 is my favorite channel!!! lol
"Classé confidentiel" still on M6, has broadcast a reportage about Jay in the premiere of star wars the 27 may!
And in "Génération hit", Jay was (le 3ème chanteur écolo préféré des français!) = the 3rd favorite green singer for the French! (For me he's the number 1 but...)
I've recorded it on a VHS but I don't know how to put this on my computer... :(

Napoleon: surely skin art is for "life", not just when you're doing your shopping ;)

David: What, he bought this tattoo at the supermarket as well as "travelling without moving"? lol. I understand what you're saying and Im just having a bit of fun. Just thought Id say that hearing someone whistle a Jamiroquai tune when you pass them on the street, for example, isn't really news worthy!

mr napoleon
hearing somebody whistle a jamiroquai song in the street make me as a fan smile, and raeding that there is an actor on tv that his jamiroquai tattoo is famous make me smile 2. dont be hard - live a little.

The guy who plays Napoleon Dynamite was on the "Conan O'brien show" here in the U.S. a few months ago, and they, of course, played the dance scene.He explained that the scene is a montage of him dancing to three or four different songs.He said that he loves to dance at home to "some sweet Jamiroquai tune"!

Hiya, in the UK Final of Strictly Come Dancing,3rd June BBC 1, the winning couple did a dance to Canned Heat, the music was performed by the in house band. They were awarded top marks for that dance, and won the whole thing. I thought they were very brave to choose the song for such a commericial show, where the public have to vote, but very pleased for the airplay!

Little L in the movie "The Sweetest Thing"!
http://tinyurl.com/rfqvu

I think someone who edits "Best Week Ever" on VH1 must be a Jamiroquai fan, because every show seems to have an excerpt in the background somewhere in the episode. I even caught a bit of "Half The Man" one time! I just wish VH1 & MTV would pull their collective finger out and actually play Jamiroquai's videos for once... the vid for FJLIS is pretty awesome but not even a bit of airplay that I could see, and not much when "A Funk Oddysey" came out, either (I've lived in the U.S. for five years now... hard to come across fans or coverage here).

VH1 and MTV use Jamiroquai a lot. Yesterday I was watching some sexiest list blah blah blah, and they played quite a large bit of Blow Your Mind while showing sexy people. It fit perfectly since it is such a sensual song. FJLIS is on all the time on these shows also. Figures since its f-ing awesome.

That Buffalo Man is standing on some hot ashes and burned his feet off - you can see the smoke!

During an episode of a US tv show called Love Monkey-they work at a record company and in the boardroom against the wall was a big poster of Jamiroquai's Dynamite CD cover. Unfortunately, you could only see the top portion but still cool to see.

I remember last year, in the TV reality show "L'île de la tentation" (Yes, I know; it's a stupid show but it makes me laugh!) a sort of party was organized and Virtual Insanity was played!

here in israel except oded with his show - we have a radio show in the morning - that every morning for the past 5 years the theme song is too young 2 die by jamiroquai. the name of the host is "razi barkay"
we love the pigamot in isrel. oded paz is a realy good comedian.

i heard 'you give me something' eating in an london pub on my last night there :)

and i heard three jamiroquai songs at a club in manchester, but i expected no less..he was a dope DJ.