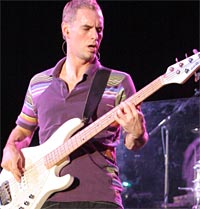 An interview with Jamiroquai bass player Paul Turner is available at the Bass Tech UK website.  As a taster, here is one of the questions asked:

You have been playing with Jamiroquai on the Dynamite tour, How did you get the gig and what was your reaction when you did?

I was called to audition along with about 10 other guys. I didn't really feel I did myself justice to be honest but the short (20 min) sessions were recorded and even though I was bluffing it they said they like the way everything felt.I was asked to go back (as was another guy) for a longer play. Unfortunately I couldn't make the second call as I was committed to a gig with Annie Lennox for Nelson Mandella in S. Africa. However it didn't work out with the other guy and I was asked to go back to Jay's when I got back to the UK. Rob (Harris Jamiroquai guitarist) had said to listen to every album as Jay likes to call from the entire back catalogue rather than a set. We jammed trough loads of tunes, some old ones and some new stuff that I hadn't heard, as well as some spontaneous grooves. Then Jay called the guys out for before returning and asking me if I wanted the gig.

It goes without saying I very happily said yes!

The complete interview can be read at the Bass Tech UK website.

After submitting details of the interview I noticed that Paul had lessons with Roger Inniss, who lives just down the road from me and I was fortunate to have a couple of lessons with myself.Small world

Gotta love him! Though a fan of Stuart, I do hope that Paul sticks around Jamiroquai for years to come :)

that nelson mandela concert was really dope. i'm happy he had a chance to be a part of that with a.lennox. doing things for humanity and not the dollar..admirable paul, very!