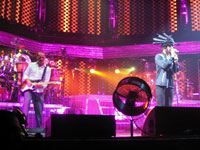 On Saturday night Jamiroquai completed the main set of dates of their current European tour with a concert at Forest National in Brussels, Belgium.  The set list was almost the same as the Rotterdam concert on Friday except that Seven Days In Sunny June was replaced by Starchild.  Here is the full set list:

On Monday night the band are performing an exclusive gig in Paris for approximately 700 people as part of their promotional work with Sony Ericsson and the Orange mobile phone company.

They then have a few days back in the UK before heading to North America for their first tour since 1999 - starting with a gig at the Atlantic City House Of Blues on 21 October. I'm going to be taking a vacation around the same time and hope to catch up with some funkin fans in both Boston and New York.

youre going to boston eh? :) No las vegas?

We really wanted to do Vegas but the timing wasn't right for us - so it's New England in the fall instead...

Ok...so then I hope you have a nice time over there..

Thats Great David! Hopefully I'll catch ya at the NYC gigs. Are you going to both of the shows??

it amazes me how clear and nice these pictures are.
david - see you in nyc.

I just bought tickets for the show in Toronto! I can't wait!

Hope you have a great time in the States, David.

Brussel was awesome! I had a great night... the playlist was good, the show even better! Best concert i've seen, really!

See you in Boston Dave, I hope to get my Dynamite cd signed by the band. Any hints or tips to get that done?

this was a magnificent concert, very nice show, it was great night !!! Ooooo I loooooove that man !! Thanks Jay !!!

I'll be at the AC show and possibly NYC as well...can't wait.

I am seeing them in Boston & NYC-so psyched!!! I will be sad if they don't play Seven Days in Sunny June-please play it!

The show in Brussels was awsome, can't wait to see them performing again in Belgium, when are they coming again? Next week? or even better; tomorrow?
They proved again that they are realy, realy, realy the best group un the whole world!
Love you Jamiroquai!!!!!!!! XXXXX

Came from France to see him in Brussel, it was awesome ! a great remenber from Belgium ! see you Next time Jay...

Hey everyone! Brussels was a great gig! BUT why did Jay keep going off the stage after every song? Anyone else think he wasn't happy with the sound? Great show, A1 as always but not so much dancing this time round ...

jenny you're right, i had to think of that to, and if i have to be honest... i found that the bass was to hard for jay's voice and i think thats why he kept going of stage after every song.
Anyone knows why????

I went to see Jamiroquai at the Forest National, my first time there! And my first time to see J.K. and the band LIVE!!! AMAZING, GREAT AND LOTS OF FUN!!! A great experience!!!