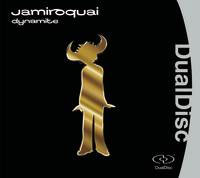 The Sony Music Store now lists details of the forthcoming US DualDisc release of Dynamite.  The CD will contain the regular album, including the UK/Japanese only track Time Won't Wait, and the DVD on the reverse will contain the following:

The DVD part of the release will contain a higher quality version (compared with a regular audio CD) of the album, which should be playable on DVD players and some computers.  Unfortunately the album looks like it won't be presented in mult-channel surround sound, and will just be in stereo.  The following quote from the DualDisc page at Wikipedia explains more...

"Because Sony has a high-resolution audio format in the marketplace [Super Audio CD (SACD)] which directly competes with DVD-Audio, Sony Music, as a general rule, only provides 16-bit, 48 kHz sampled LPCM stereophonic (and sometimes Dolby Digital Surround) sound on the DVD side of their DualDiscs. The sound is compatible with any DVD player; however, it does not provide the higher fidelity and resolution of 24-bit DVD-Audio."

Dynamite is scheduled for release in the US on 20 September. Details of the vinyl release of the album are also available at the Sony Music Store site.

I'll be the first in Boston to grab a copy...count on it.

And still nothing official about the tour... damn!

I want this cover for all the others versions!!! Lucky americans! Cheers

I'm sooo gunna buy this versh for the extras and cos i love the cover, though i've already got the UK copy. Still there's nowt wrong with buying another copy of such a great album!

sad sad sad sad! I was hoping that this album could be an SACD! Damn it, when they gonna release it?
it would be wonderfull when they lunch kind "top hits" in SACD format!!

i want to hear it´s music

I really can't wait! :) The US is finally seeing some Jamiroquai lovin'...finally

Hi David,
There's a discrepency on the Sony page you link to... Text on page says the DVD will feature the Making Of FJLIS video, but the tracklisting in the little window on the upper right corner lists "Seven Days in Sunny June" video instead...

is this only for the U.S or is there a chance for the others sony worldwide to do it becaise i´m not in the U.S and i want to buy this version.