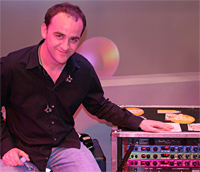 Line 6, the company that supplies Jamiroquai guitarist Rob Harris with digital modeling guitar amplifiers and other equipment has added a page about Rob and the equipment he uses on stage to their website.

"In the studio I've had situations where I've recorded with vintage amps and also used the Pod and the producers have chosen the Pod tone over the miked amp.  It's an incredible tool for getting an instant sound and vibe down as quick as possible. I like the Variax too.  I used it on a few tracks on the new Jamiroquai album "Dynamite".  I don't tend to take too much notice of which particular guitar is being modelled.  I find that I just twist until I find the guitar sound that fits into the track I'm playing."

Alongside the page on the Line 6 website, they have also included a photo (that I took) of Rob and his kit, taken at the filming of the Jonathan Ross television show in May of this year.

ok but...remember what Line 6 staff forget to tell you...to get that true tone...for live sets he always uses an all time classic Fender Stratocaster and a pair of amps from Mesa Boogie Lonestar series.

Yo are great Rob.

Crusaiders, George Benson and Jimmy Hendrix are a good inspiration !!!

This week in 1997, the official Jamiroquai website at www.jamiroquai.co.uk was opened to the public.