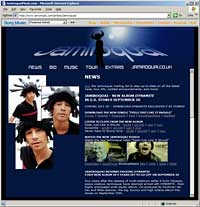 Sony BMG have recently launched an official website for the US market in preparation for Dynamite - which is set for release on 20 September.  The website can be found at www.sonymusic.com/artists/Jamiroquai/ (although the browser title bar says JamiroquaiMusic.com - which currently points to Sony UK!).

Regarding a US tour, the website says "U.S. dates TBA - Oct. 21 - Nov 11", which looks like the band are planning a three week US tour later this year!

On the music page of the site, a tracklist for the US release of Dynamite is given, which includes the track Time Won't Wait, which is only available on the UK and Japanese releases.  Dynamite is released on 20 September, but will be available on iTunes from 26 July.

The site also contains a form that can be used to sign up to the "Jamiroquai U.S Email List".

Update: As of 18 July, JamiroquaiMusic.com now points to the new site.