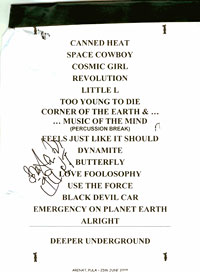 Here is the setlist from the concert at the Pula Arena in Croatia from Saturday 25 June:

Comparing this to the setlist from Budapest a few days ago, Dynamite and Emergency On Planet Earth were not played, but were replaced by High Times, Butterfly, Use The Force and Virtual Insanity.

For information, the "Intro" song is Electric Mistress playing right off the CD for the final minute while the band members took their places on stage.  Jay then came on and the show started immeadiately with Canned Heat.  Music of The Mind was followed by a percussion/drum break, which was also written on the "playlist" the band have taped to the floor.  The printed setlist included the tracks that were not played (EOPE and D) and not the four tracks that replaced them.

The band really have been rehearsing a large selection of tracks from across the complete back-catalogue for this tour, and if you get a chance to see the band this year you certainly won't be disapointed.  Jamiroquai now have a few days rest before the B-Live concert in London next Sunday.