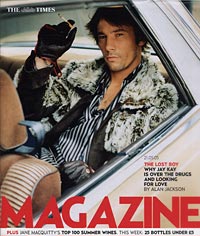 Jay is on the cover of Saturday's Times Magazine (UK) - which comes free with The Times newspaper.  In addition to the cover, inside there is a four page article.  The introduction to the article says:

"He's sold 20 million albums, owns a fleet of supercars, and lives in a spectacular Buckinghamshire pile, but, for Jay Kay there's something missing.  Alan Jackson meets a space cowboy who's put the drugs behind him and is in search of his cosmic girl."

The interview talks about his relationship with Denise Van Outen, but much of it is devoted to talking about Jay's addiction to drugs and how his mother (Karen Kay) told Jay "You're going to lose it all, boy.  Lose everything!  Stop this now, or you'll ruin your entire life."  On 1 January 2004 he started a strict regime to get off of drugs, helped by his good friend Ollie and he hasn't looked back since.

Looking back at a time when the band were writing tracks in Costa Rica in October 2003, Jay talks about how because of his addiction to drugs at the time the band were thinking "We're wasting our time here.  He's not going to hold it together.  This album will never get made."  Coming out of this experience was the inspiration behind the the track Hot Tequila Brown.