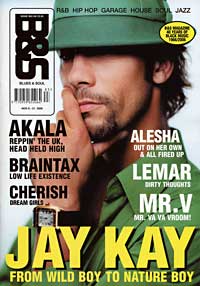 Jay is featured on the cover of the current issue (dated 8-21 November) of Blues & Soul magazine (UK).

Inside the magazine is a two page article/interview where he talks about the stress of the music business, and gives some very honest opinions about the paparazzi.  He also talks about the Dynamite album...

"I listened to Dynamite for the first time in about a year yesterday and I think it's a fu**ing good album!  There's some bad tracks on there, but I don't feel like it was pushed enough...  People were saying, 'Feels Just Like It Should, not sure if we can really play that.'"  Maybe because it was left of the classic Jamiroquai sound?  "Yeah, maybe, but what's wrong with being a bit left?  That's what I wanted to do.  If I hadn't, people would be like, 'Oh, you've just done the same thing as you did before.' You can't fu**ing win!"

Blues & Soul is available from all good UK magazine stores now or from the magazine's website.

I always love Jason Kay's point of view when he talks about Music, sound and creation. He's definitely right !!!

First time in a year??? I listen to it every week on a friday nite its compulsary for me lol! Oh and i have random tracks on my ipod everyday. It an amazng album , i love it!!! Oh and about FJLIS, i never doubted it in fact i've played it for a year and a half straight(esp the live vershs)....i'm sure my neighbours are sick to death of it but who cares! And which are the bad tracks? I don't see any, well in my opinion!

Feels Just like it should is a great sound, and Dynamite lives up to its name. I've never heard a bad Jamiroquai track, and I've heard them all.

I would prefer to say that there is no such thing as a 'bad' track . . . there might be better tracks, However sometimes I wonder about HTB - LOL !!! But there are songs for different times and moods, and songs that some can appreciate more than others. SDP and BDC are far from sub standard, they are different.

Hail Jamirokaki who encouraged me to listen to the tracks that I used to skip. Now one of those (REV/EOPE) is one of my all time favourites, especially after hearing it live in person.

FJLIS was love at first listening for me. Tallulah was only a tragedy in that it was not released as a single - it should have been a big hit.

Dynamite was never any less special than any of the other albums. However, the previous albums had tracks which left profound impressions on me, and have songs that make the hair stand up on the back of my neck every time I hear them, or cry tears of joy when I listen to them.

A bad song by Jamiroquai still beats a lot of other songs. That's the way I see it.

Little H has said everything i wanted to say...BDC in my opinion is great attempt at rock and i couldn't say any off them are bad although Electriss Mistress was not great, a bit too electronic but a still good enough. DGHAC has wicked lyrics, true meaning in todays world, SDISJ is pure class, Dynamite is soo funky, Starchild is personal fav for me makes the hairs on the back off my neck stand for some(personal) reason lol, Loveblind is great cos its like 2 songs in one, HTB is a very true, personal and open, TWW is brillaint, the horns, the message is so positive and Tallulah is just beautiful, simple and very diff from anything prev done (i can't relate it to anything they've done before). Oh and like i said FJLIS is just funky in a diff way. So no i can't see which tracks are bad.

you have said it Mr Kay.

Great cover :) :) :) Any chance of the whole article being scanned in David?

Samantha: yes, I will scan it it but only when the magazine is no longer on sale in the UK. On a similar note, scans of the Mail On Sunday interview are now on the downloads page.

The interview article on jay that talked about the number that used the flugelhorn in the first album was read before. I thought that the meaning said that it was very good hearing "Dynamite" after a long time was understood well. Originality is indispensable for the artist. Though I am the same age as jay, it is happy to imagine my life in the future because there are a lot of things that I want also to do. Let's hold out mutually!!!